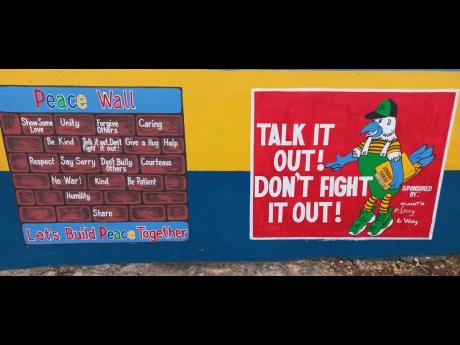 The peace wall that was conceptualised by Levy. 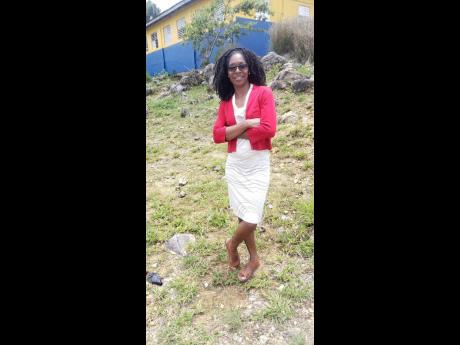 Grade Two teacher at Pike Primary and Infant School in rural Manchester, Mortecia Levy, is hopeful that her decision to fund the creation of a peace wall will improve behaviour at the institution.

Following the resumption of face-to-face classes after the almost two-year shutdown due to COVID-19, she noticed that many of the children had become boisterous and were resorting to violence and aggression to settle their issues.

"So one day I was on Facebook and saw the Perky Parrot mascot and the thought came to me that this is what I needed to do, to play my part in helping to effect change in my school," Levy explained. Funding the wall has earned her the respect of peers and parents alike.

"I did not know that everyone would have gravitated towards it so quickly and it is like a proud thing for them. The school is thriving and moving forward, so this can only help to push it further. The sort of impact that I am hoping to achieve is to help mould the thinking and perception of children, because everyone is from a different background. I always try to portray peace and motivate the children to do and be better. The peace wall is designed to do just that, life is too short, so I want the children to know that they have to go out there and enjoy life. If someone steps on your toe, just move along, you don't have to pick a fight," she urged.

The peace wall cost $5,000 but Levy explained that the artist was charging five times that amount until she explained its purpose.

Levy is driven by an undying passion to see a better Jamaica and has urged others to play their role in helping to mould the minds of Jamaican children, whom she believes are in dire need of the right guidance.

"It's sad because most people in today's society believe that violence and brutality is the response to everything. We want our children to know that you are not going to go anywhere in life with this thinking," Levy said. Saddened by reports of teacher-student conflicts, she said that she tries not to jump to conclusions as to the cause. She reasoned that both adults and students deserve respect.

"How we[adults] talk to them [students] can make a difference because they, too, have feelings and are going through different forms of stress and trauma from their backgrounds. A child comes to school and he or she is like this, but before we jump to conclusion and say negative things about them, be that child's friend, take them one away, don't approach them in front of the class and try to embarrass them," the educator said.

"I was really excited when she talked to me about it. The gesture has been really good for the school because it will reinforce discipline and encourage students to talk it out and not fight it out," she said. "After the resumption of face-to-face [learning], we had a lot of situations where students were becoming really aggressive. We had a few fights, which prompted a lot of psycho-social sessions with them, but this wall will really enforce what we have been doing. The teachers and parents who saw it have called to express their appreciation. We had a staff meeting yesterday and persons were really commending Ms Levy for doing that," Fry said.