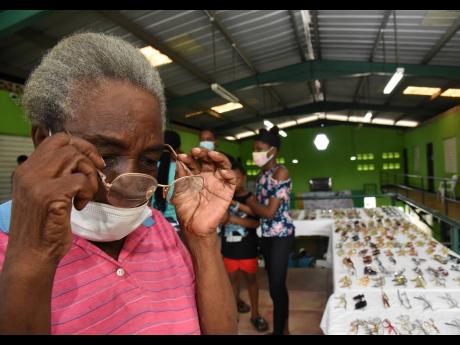 Ruth Morgan tries on a pair of reading glasses during a free medical camp hosted by the High Commission of India in association with the Prime Minister Andrew Holness’ constituency office, the Indian community of doctors and Indian pharmaceutical companies. 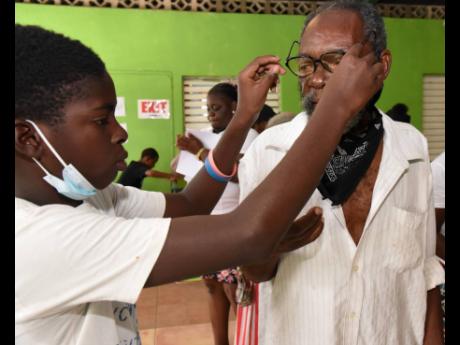 Senior citizen Ruth Morgan was relieved to get her eyes tested on Sunday during a free health camp organised by the High Commission of India. The outreach was held at the Seaward Infant and Primary School in Olympic Gardens, which is situated in Prime Minister Andrew Holness' St Andrew West Central constituency.

Morgan, 71, a retired labourer, said she was particularly happy about the timely medical aid and hoped that it would permanently resolve retinal problems she has endured over the years.

"Mi go the [public sector] clinic and get a referral, but mi cyah manage the up and down so mi decide fi batter wid di eye. Sometimes it get so bad that mi can only see out of one of di eye dem, enuh," said the elderly woman.

"Mi couldn't pay for this at the doctor and God bless how long it would a tek a Public (Kingston Public Hospital) or down the clinic," she added.

The grateful senior, who was born and raised in St Mary before migrating to Kingston decades ago, commended the medical team for their services.

"Dem never just rush fi me get mi check up. Dem ask mi some very good questions and it look like say dem know weh dem a do. The nurses dem was nice also," Morgan added.

Kaydeen McKenzie, 32, a stay-at-home mother of three, said the health fair afforded her the chance to children's medical in time for the start of the new school year in September.

"Dem get a date [for school medical] way down inna September because the clinic a seh dem short staff and cyah do nuttin bout di situation. So before this, mi a look pon a private doctor fi do dem medical, and dat a money weh mi no have right now cause mi deh home not working," McKenzie said.

She, too, was very appreciative of the courtesies offered to her children by the willing doctors and nurses, who were volunteering their services.

"Mi son and daughter (11 and13) have a clean health bill and mi happy about that. Mi love how dem carry out dem tasks," she said.

The camp was the 24th staging since it got started in January 2021 and is being held to make India's 75th anniversary of independence.

Members of the public received free medical consultation, basic tests and free medications for a range of ailments including hypertension and diabetes.

India's High Commissioner to Jamaica, Rungsung Masakui, told THE STAR healthcare workers within the Indian medical community have been responding well to the call to deliver service.

"I am really just happy to see these medical camps going on. The effect that it is creating through the Jamaican society is incredible and the persons could tell if you were to get their testimonies," he said.

"In terms of the doctors that we have coming here, I will always say that it is a tribute to our doctors and pharmaceutical companies who have volunteered without any hesitation to be a part of this beautiful medical camp. I hope that this will go on for a long time to come because it is them who are sustaining this medical camp," Masakui added.