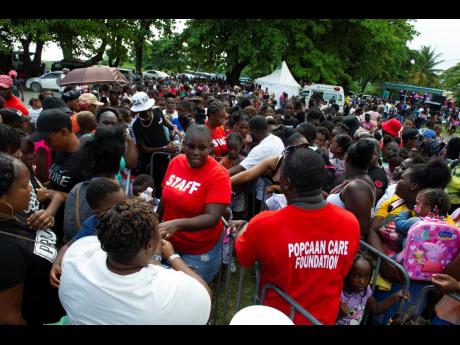 Volunteers try to take control of a crowded presentation area where approximately 1000 school bags were presented to students at the treat. 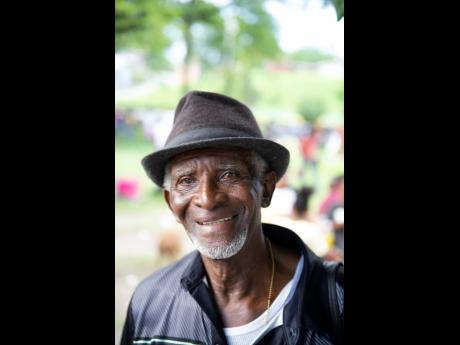 Popcaan’s grandfather Webster Sutherland said that the entertainer has always been very kind. 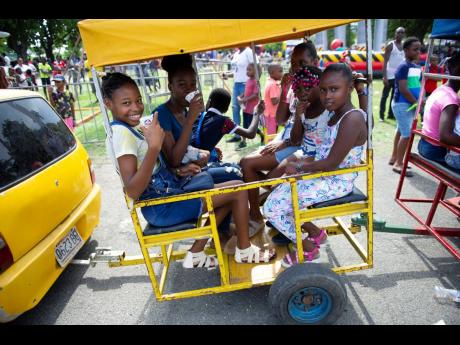 Children enjoy one of the rides at the treat which was held at Rudolph Elder Park in Morant Bay, St Thomas.
1
2
3

Yesterday Hilda Doyle, 73, expressed gratitude to dancehall artiste Popcaan after collecting a number of school supplies for her two grandsons.

She said it would have been difficult for her to purchase all of their items alone and that attending the deejay's annual Off-to-School Treat and Fun Day was her only alternative.

Doyle and hundreds of other parents and guardians flocked to the Rudolph Elder Park in Morant Bay, St Thomas, and were feted with school supplies, including bags, books and other stationery. The children also enjoyed a variety of rides.

"Dem mother working but is not much she mek on the streets. I am happy for the gesture by Popcaan because it save me an extra $3,000 for their bags, and thousands more for the books and the other stuff what they get," the elated senior said. "I feel very good because Popcaan do all the best weh him can do for St Thomas people. Yeah, mi feel good and I am so proud of him and what he has achieved. Him been very 'unruly' from him and my son go Happy Grove [High School] together but mi always love him."

Doyle, who resides in Morant Bay, said that her grandsons, who are age 11 and nine, could have returned to school in September with the bags they used during the last academic year.

"Wi just no have it like that so believe mi, this help to ease of some of the stress pon wi head. It might seem small but a nuff a di parents dem here a say the same thing as me. The gifts dem mek a big difference," added Doyle, who also disclosed that she had 20 other grandchildren who weren't living with her.

Popcaan's grandfather, Webster Sutherland, smiled as he walked around the venue meeting and greeting many of his grandson's fans and well-wishers.

"Mi say mi proud a him so till. A from him lil' bit so him love fi help others. Sometimes him all help out him owna self. Yes man! Nuff time him deh a bus stop with the pickney fi go school and taxi pull up and him a put everybody in and when him look no space no deh fi him," the beaming granddad shared.

His sentiments were echoed by Unruly Entertainment's office manager Sharon Williams, who told THE WEEKEND STAR that 1,000 school packages were distributed to families yesterday despite the event being staged on short notice.

"Andre [Popcaan's given name is Andre Sutherland] actually never decided that we were going to go ahead until about three weeks ago. So the forward planning that I can normally do, that is to reach out to sponsors and all, I never did that. Andre literally gave me $3 million and Clarks out of the UK gave me $2 million and that is what it costs to put on this year's event," she said.

The event, which was held through the entertainer's Popcaan Care Foundation, was returning for the first time in two years following setbacks due to the pandemic. The event was sponsored by Clarks Original, Unruly Entertainment, OVO Bashco and SMA Talent.