Keys to city of Kingston presented to Windhoek, Namibia 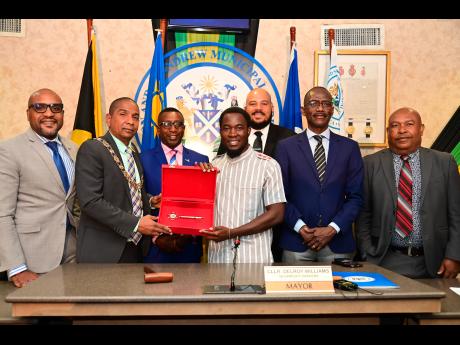 The Kingston and St. Andrew Municipal Corporation (KSAMC) has presented the Keys to the City of Kingston to Windhoek, Namibia, symbolising mutual friendship and shared interests and cooperation between the capital cities.

The ceremony took place on Tuesday (August 16), during a special sitting of the KSAMC, at the entity’s downtown Kingston offices.

Presentation of the Keys to the City is the highest honour that can be bestowed by the KSAMC.

The resolution to confer the honour on Windhoek was moved by Mona Division Councillor, Andrew Bellamy.

It is to be shared with the Ministry of Foreign Affairs and Foreign Trade and the Ministry of Local Government and Rural Development, as well as other municipal corporations, for information and support.

The KSAMC is hosting a three-member delegation from the Namibian capital city from August 14 to 19 to deepen ties for cooperation in agriculture, entertainment, sports, culture, infrastructure and urban development, tourism, health, among other areas.

At a press conference following the presentation of the Keys, Mayor of Kingston, Senator Councillor Delroy Williams, said the collaboration will serve the interests of the respective municipalities.

“The visit here [by] the delegation from Namibia, in particular the City of Windhoek, is in pursuance of strengthening and continuing the areas of cooperation between the two cities. We really look forward to a fruitful relationship between Kingston and Windhoek and we are quite confident that the relationship will bear fruit, and that it will last for generations to come,” he said.

For his part, former Mayor of Windhoek and leader of the delegation, Dr. Job Amupanda, said the strategic areas of collaboration identified will present opportunities for future partnership.

“We are very excited,” he said, noting that there will be opportunities in many areas to grow the revenue base of the two city councils.

The establishment of ties between Kingston and Windhoek follows the signing of a memorandum of understanding (MOU) between Jamaica and Namibia earlier this month to form the Jamaica-Namibia Joint Committee.

The Joint Committee has entered into agreements in several areas, including tourism, logistics, urban development, and diaspora cooperation.