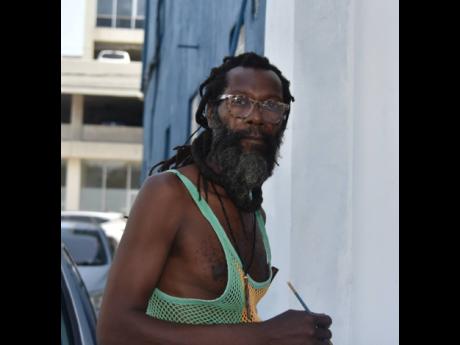 Clement Jones, better known as ‘Ras Lava’, has been an artist since he was nine years old. 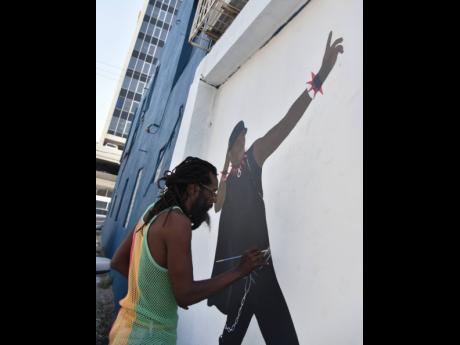 Dancehall icon Gerald ‘Bogle’ Levy being immortalised, through art, as part of the Kingston beautification project on East Street.
1
2

Born and raised on Matthews Lane, Kingston, Clement Jones, who prefers to be called 'Ras Lava', always knew he wanted to be an artist. From as early as nine years old, Jones was emulating his older brothers by painting, drawing and flexing his creative muscles.

"It keep me outta trouble more time. The time I'd take running up and down out there doing nothing, I used to sit in and do me drawing."

With 23 years honing his skills and solidifying himself as an artist, Jones had big dreams for himself. However, he had to take a step back from his passion to support his now- flourishing family.

"I did have to put it down one time. Because I end up with a family and I did have to take up other things...doing commercial painting of buildings and dem things, those types of work," he said.

Now with his children fully grown and able to support themselves, Ras Lava has decided to reignite his love for visual art. After a 19-year hiatus from the art scene, Ras Lava began creating masterpieces in his workshop on Matthews Lane.

"My youth dem big and grow up now, all giving me grand [children], so I just start back. I take it up from 2014 and I haven't looked back."

In the eight years since his return to being a practicing artist, Jones has had exhibitions with the National Gallery, won medals in Jamaica Cultural Development Commission competitions, and is currently working on a mural, in collaboration with Kingston Creative.

He is currently painting a piece that salutes the memory of the late dancer and recording artiste Gerald 'Bogle' Levy.

"Dem (Kingston Creative) give me the idea of wah kind of Bogle dem wah. Dem a deal wid fashion, right, and Bogle did make statements. Bogle have his own fashion and his own style, you know, so that is what is all about," he said, referring to the mural of the Jamaican dance icon who was also known as 'Mr Wacky'.

Hoping to one day inspire young artists just as his brothers inspired him, Ras Lava said he will never put art down again.

"I would love them to do that, because my inspiration was my big brothers them and Ras Danial Heartman, my manners and respect to them. Those were my inspirations as an artist. So yeah, me woulda love fi gi dem some a weh me get."