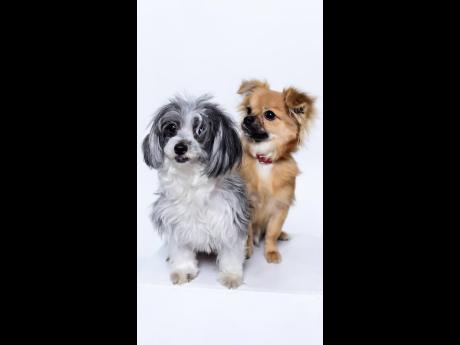 Coco (left) and her puppy Rich.

The old adage 'a dog is a man's best friend' holds true for Andrea Plummer, who for the past week has been worried sick about the whereabouts of her pet, Coco.

"It's like my family is broken without her. I am in need of her and I don't think I can replace her," Plummer told THE STAR. Coco, a seven-year-old black and white Pomeranian, mixed with Yorkshire terrier, went missing while Plummer finished chores at her St Andrew home. She theorised that a passer-by took the dog.

"If she had wandered away, she would've come back. Somebody actually took her away. I was in the house but the door was open and the gate was locked. But because she is so small, she can get outside. I never realised that the door was open. So me go outside and a look and me can't find her nowhere. She went through the main gate and I just never see her after that. Me just know say a somebody drive pass and tek her up," she said.

Plummer, 31, said she and her 11-year-old son are distressed by Coco's disappearance so she has offered a $30,000 reward for her dog's safe return.

"She is a people person kind of dog, she nuh fuss or bark, she is kind of loving. It is a dog where if dem get her, dem not going bring her back. Not having her, me feel a way. Me a lose weight and my son, him sad 'bout it too. Me have her from long time, from nothing to something," said the professed dog lover.

She further indicated that the bond with Coco got stronger last November when she delivered a puppy named Rich and endured a gruelling healing process after she was spayed and neutered.

"What me go through with her, how much time she almost dead. Just the other day when she have her puppy and the journey, a me with everything. People are really happy with dogs but when you just come and tek the dog and make other people unhappy, it is not alright," Plummer said, the pain evident in her voice.

She described Coco as her confidante, one who helps her during her times of despair and said she brings joy and happiness into her life.

"Knowing that every day when I come in from work, I would see her, I looked forward to coming home and seeing her. Now there is none of that. Sometimes when I go out and see other people with their dogs, I realise how much she means to me. She was my comfort. Knowing that she gone, me nuh know how fi explain it. Me in need of her and the other puppy too. Him sick, basically him depressed and me nuh want him go dead true she gone. It ago be even worse fi di two a dem gone," she said.