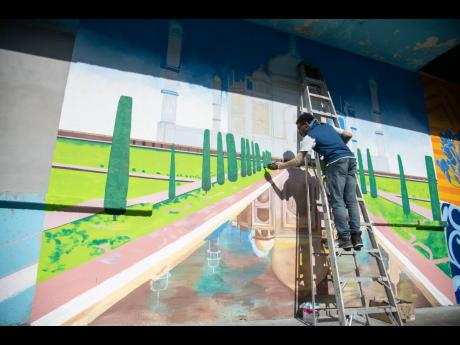 Bryton Brown works on a mural depicting the Taj Mahal on Church Street in downtown Kingston. 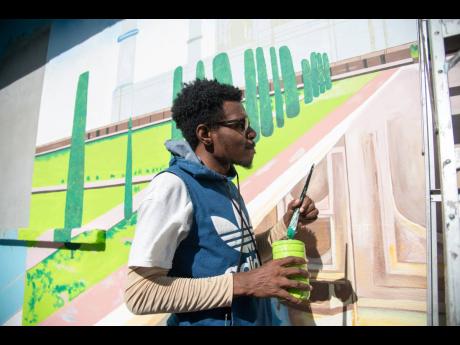 Brown said that he is happy for the opportunities being presented to young artists to help spruce up Kingston’s image. 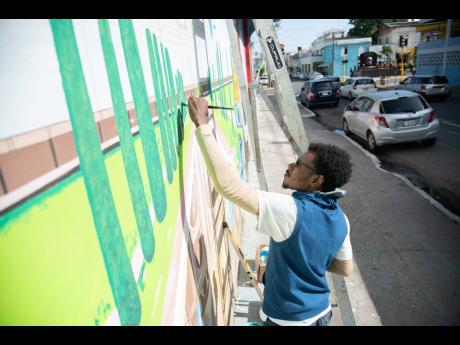 Brown also said that he wanted persons see art as more than just a hobby.
1
2
3

As downtown Kingston inches towards being the picture of urban development promised by the Vision 2030 plan, local fine artist Bryton Brown is revelling in the opportunities being created for young artists.

"For me, it's nice to see them take the Vision 2030 serious in regard to redesigning downtown, making it a more commercial hub for people to come down here and do business. As one of those artists who partnered with Kingston Creative to help bring murals down here, it's good to see opportunities being given to artists to showcase their talent and spread the awareness of art, you know, making the place look a little bit lively. So it doesn't look like the area is just dilapidated and torn down, [it] gives people a sense of pride," he said.

The 27-year-old Manchester native told THE STAR that he is currently working on a mural that was commissioned by the Indian High Commission on Church Street. He hopes to finish it this month because he has other projects that are slated to begin. Brown said that so far, he has been getting good feedback from people about the murals.

"Some might probably question what they are for, but they do appreciate the talent. They find it as an opportunity to also relate to us about their struggles downtown and what they understand of art," he said. Brown said that some of the persons who stop to ask questions about the murals did art when they were younger.

"They find a joy to see us as younger artists taking part in these things to brighten the community," he said.

The piece he is working on paints a picture of the Taj Mahal, an ivory-white marble mausoleum on the right bank of the river Yamuna in Agra, India. The landmark is one of the Seven Wonders of the World. Though fulfilling, Brown said that being a muralist comes with its own set of challenges.

"It can be a bit stressful on certain days when the sunlight is really intense, but I've grown used to it. You just have to treat it like a nine-to-five. You know you get up in the morning early and start before the sunlight really gets there. And sometimes take a break and step away from the work and the sun," he said.

Regardless of any difficulties, Brown said that he hopes for more people to respect art as more than just a hobby.

"It's not just a hobby for most of us. For us, it's really a lifestyle, a livelihood where it can open opportunities for us, whether travel, monetary or creating a sustainable legacy. And it's a way of uniting people ... and highlighting the different talents and skill sets that a person may have that may not function quite as well in a government institution or a regular nine-to-five office desk work," he said.