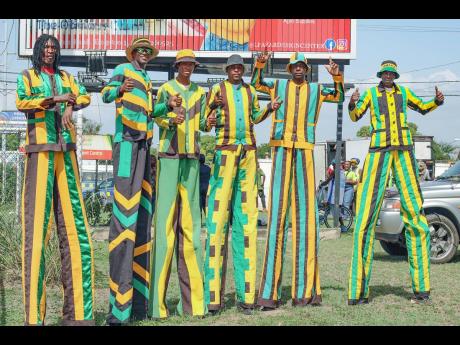 Members of the Action Stilt Walkers group from St James. 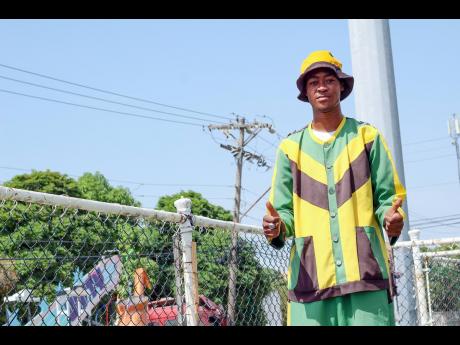 Brown said that training in hilly terrain helps to improve his performances. 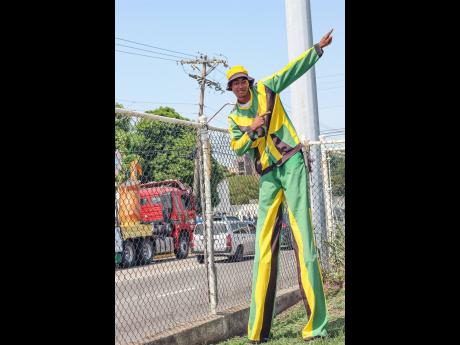 Growing up in the sometimes volatile community of Cambridge, St James, Torray Brown wanted a way out and thought it would come by becoming a member of the Jamaica Defence Force.

"I live in Cambridge and to be honest life is bad. It very bad and me didn't want to get caught up in it so I had to try and find my way out. I needed something to keep me occupied," Brown related. His mother also dreamed of him joining the military but injuries he received in a motor vehicle crash derailed his chances. A year ago, he relocated to the community of Retrieve, also in St James, when he noticed a group of men walking on sticks. It immediately piqued his interest.

"Me end up go up there and see dem a walk pon these tall things and me a wonder if dem nuh fraid. Somebody a tell me fi try it out but me tell him say me too tall fi that and my body nuh ready fi dat, because maybe if me try it, me probably pop up. During the conversation, him convinced me fi try it and one morning me get up an try it and from that, it tek me three day fi get it," said Brown, who stands at 6' 3". Although not as traditional an occupation as the one he desired, Brown has taken to stilt walking and has been accepted by his family and friends. He told the news team that he feverishly anticipated holidays where he would head to the Hip Strip in Montego Bay to watch brave men and women balance on stilts, much to the amusement of locals and tourists.

"Me always say a so dem man yah big and tall but me never think say me woulda do it too. But honestly, stilt walking a di best thing fi happen to me right now," the 21-year-old joked.

Brown was spotted at the Independence Float and Street Parade, which was held on Emancipation Day. He was among a group of 24 stilt walkers in the Action Stilt Walkers group from St James. They got plenty of attention and love from pedestrians who lined the roadways eager to take pictures and dance with them.

Brown said that stilt walking requires copious amount of bravery and skill. He shared with THE STAR that he was extremely nervous during his first performance, however, he quickly wowed the audience with his dancing and other acrobatic movements. The Cambridge High School graduate explained that training takes place on bumpy roads and in hilly terrain, which, contrary to popular belief, improves the quality of performances. Stilt walking, he assured, was not a hard task and the only challenge he faced was finding the perfect footing to keep balanced. Brown is now reaping the success of his unique profession, having secured employment in the tourism sector. He is urging young, unattached males to also get engaged in the cultural and performing arts.

"Nuff a dem come round and wah learn how fi walk but dem fraid. Me always tell dem say a so me did fraid too and it tek practice. In the future, I want to have my own stilt walking group to teach young people fi walk and send dem a road, just like how dem do fi me. Stilt walking keep me occupy and mi wah help others," said Brown.