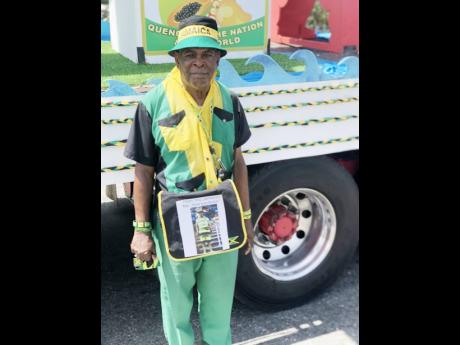 You can spot him at every sporting event hosted at the National Stadium, adorned in his Jamaican-esque outfit from head to toe.

Dubbing himself as 'Mr Jamaica', it would have been remiss of Patrick Campbell not to attend this year's 60th jubilee celebrations to present himself as the epitome of what it means to be a true Jamaican. He was front and centre during the Emancipation Day Float Parade yesterday.

"I had to be here today to see the floats because I love Jamaica. I used to tek part in the celebrations and [it's good] to see it come back after 'bout two years. I looked forward to it every single year and this year, I am really impressed with the outcome. This exceed my expectations," he said, beaming with pride.

The very sprightly 70-year-old reminisced on his early years as a boy scout while he attended Holy Family Primary School. He recalled that he participated in Emancipation activities in the past and remembered his family trekking from their home on James Street in central Kingston to the National Stadium for the celebrations.

"I remember marching in with the band. It was a nice thing with the lights and all the officials there and the bands. It was an experience, trust me. So today's float is bringing back memories of my childhood days. There was no way I could make this miss me," Campbell told THE STAR. Campbell retired from the police force after 40 years and has found a new love in showing great national pride at sporting events.

"I think I am now addicted to the Jamaica colours. I love going to the events and enjoying myself. I like track and field although me nuh really partial with the sporting events. Is one thing I really enjoy watching and it's the Reggae Girlz because dem make me feel good. They always make me feel proud to be Jamaican," he said.

As part of his 'Emancipendence' celebrations, he kick-started the week by making his favourite Jamaican dishes, pepperpot soup, saltfish rundown and ackee and saltfish. He said the dishes assist in making the Jamaica 60th experience more authentic. Campbell said that his only wish for Jamaica's 60th year is for law and order to be restored.

"Right now yuh have too much people defending criminals. It hurts me to see how the country a run. I would love for everybody to live good and to see everybody come out in their Jamaica colours this year. It feels good to be Jamaican," the father of four stressed.