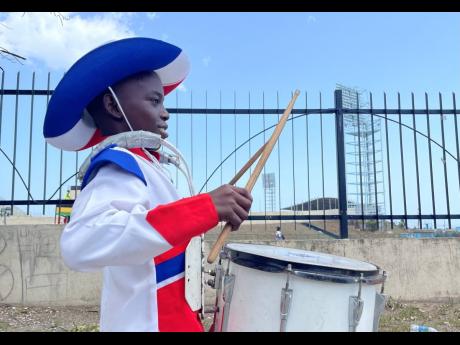 Despite his height, Tayshawn Spence stands tall as he drums away. The 13-year-old, who is a member of the Eagles Drum and Bugle Core, was out with his fellow musicians at the Emancipation Day Float Parade yesterday.

The youngest and by far the shortest member of the Eagles Drum and Bugle Core, 13-year-old Tayshawn Spence is hoping to go places through drumming.

Tayshawn, who started drumming in February, said he has so far received enormous support from his Windward Road community.

"Dem tell me 'Tayshawn just gwaan do weh you a do. Focus pon your drumming and do your schoolwork'," he said. Dressed in his blue, red and white ensemble, Tayshawn was among the many marching bands serenading the public on Emancipation Day during the float parade. Equipped with his snare drum, his hands got no rest as his tiny limbs worked overtime to keep up with his bandmates.

"A mi friend make me deh inna drumming. Him tell me 'bout it then me just start. Then me practise and practise," he said. Tayshawn, who stands about four feet tall, is known among his band peers as soft spoken with wrists of steel.

"Him nuh really talk still, enuh, but him can play. Yeah man a 'Short Boss' that man," one bandmate told THE STAR. Though new to the music scene, Tayshawn said it is the many possibilities associated with drumming that have captivated him.

"Mi love it because it can bring me go places," he said. "Like when you have something that can get you in trouble, you can just play play and when you done, you feel better after that."

Less than six months into his drumming, Tayshawn, who is a student at the YMCA Academy, said that by age of 20, he hopes to be a drum master.