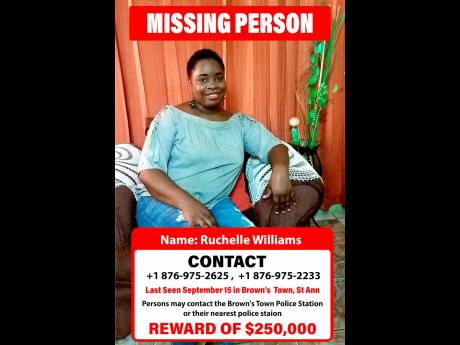 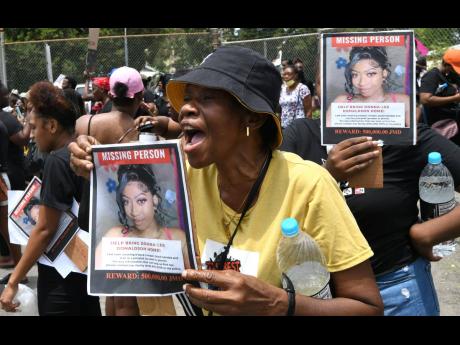 Dozens of demonstrators protest perceived police inaction in the investigation of the missing social-media influencer Donna-Lee Donaldson on Sunday.
1
2

Williams is still struggling to accept that she may never see her child again after she was reported missing on September 15, 2021.

"It is not nice. Can you imagine you looking out your window every day for a year? Everywhere you see somebody you are hoping it is her. Is like you are driving and searching. You come back and you are so tired because you are out there searching the place," said a tearful Williams. "My Ruchelle! Because of the whole thing I am sick. The stress is getting to me and I also have cancer. Mi no supposed to worry because I am supposed to start chemotherapy soon. But inna mi stomach start hurt me so much from the other day."

Ruchelle, who was 34 at the time of her disappearance, was reportedly last seen at a plaza in St Ann dressed in a blue blouse and black pants. Her disappearance triggered an intense search conducted by residents of Goshen district in St Ann, the police, the Jamaica Teachers' Association and the Education Ministry. Williams, a mother of four, told THE WEEKEND STAR that her soul feels a bit emptier with each passing day that Ruchelle remains missing. She said that the pain was compounded when she heard about Donaldson, 24, who has been missing since July 13.

"I don't know what to think. I have been praying so much about it and I really don't know what else to think. It is so unfair. Life is just so unfair and so many things are happening. Every time you hear about somebody else it just hit you like a ton of bricks. But this morning when my sister called and she was saying that they are going to have some protest overseas at the embassy, she was saying some family member must put up Ruchelle picture again," she said. Williams, 58 noted that the anniversary of Ruchelle's disappearance is approaching and she is not dealing with it well.

"Every day you get up, you look out to call her, you go in her room. I don't know want nobody to touch her thing nor sit in her chair. It makes me wonder what happened, what went wrong, what transpired. What if she is suffering or dead? All these things run through my mind every day and it is not a nice feeling because it just hit you. Sometimes I don't want to watch the news, I don't want to see anything. Even this morning [Thursday] they were saying that I am worrying because I can't eat. My sister called me this morning and she is also in pain, just pain to know that men are being so brutal. They just take them like that as if they are not somebody's child," Williams said.

Donaldson was reportedly last seen at the apartment of her boyfriend, Constable Noel Maitland. He was arrested on Wednesday by detectives from the Counter Terrorism and Organised Crime unit after a lengthy case review. Williams encouraged Donaldson's family to continue pushing for justice.

"It is a feeling that you can't express yuh know. Because when it happens to somebody is the same thing that comes over you again. It is not a nice feeling, anxiety, fear and just pain. But I will say to them to not give up until they get the answers that they are seeking," she said.