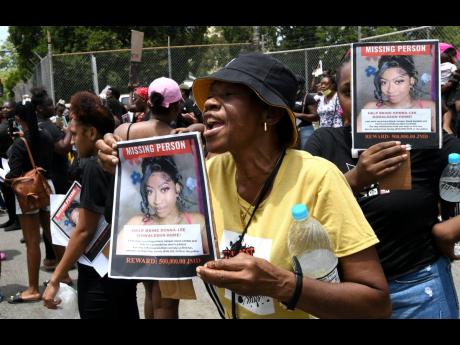 Relatives and friends of Donna-Lee Donaldson protest in front of the Half-Way Tree Police Station yesterday. 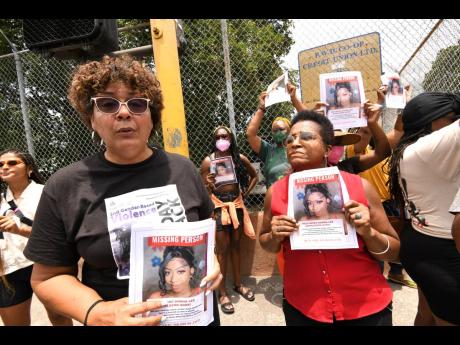 Friends, relatives and supporters of 24-year-old Donna-Lee Donaldson have made it clear that they will not be silenced, as they seek answers about the investigation of her disappearance.

As they staged a fourth protest on Sunday, Patricia Duncan-Sutherland, president of the People's National Party Women's Movement and dancehall artiste LA Lewis formed part of the throng that walked from St Andrew Parish Church to Chelsea Avenue in St Andrew.

Lewis told the news team that he is saddened by Donaldson's disappearance and is urging investigators to quickly provide answers as the public grows restless.

"Memba, enuh, when you lose someone, whether male or female, you a go want to see justice be done. Donna-Lee is a beautiful queen and the way how she missing, it raise suspicions. The people dem just want a speedy answer, so the commissioner of police need fi speed up this thing yah because we can't afford to dissolve the good relationship between the police and the people dem," Lewis reasoned.

Similarly, Duncan-Sutherland said her attendance at yesterday's protest was not only to give support to the family but to speak against the unfortunate series of events that have involved the death of women. In the last month, there have been several incidents of violence against women, notably the murder of a Clarendon woman and her four children.

"What makes this one different is that the persons of interest in this case are members of the police force and so as that we do not have a situation that escalates to lower levels of trust, we need to make sure that the police act with alacrity in this case. Right now I am very concerned about the safety of women in Jamaica," Duncan-Sutherland stressed.

She explained that about 25 per cent of women living in Jamaica are victims of violence and incidents which stem from domestic disputes.

She is hoping that through the pressures being placed on the police, answers will be provided and justice will prevail.

Andrea Lugg, Donaldson's aunt, indicated that the police have not provided any update on the investigations to the family, leaving them in a deeper state of despair. She stressed that Donaldson's mother, Sophia, is crying a lot and hardly eating.

"We trying our best to make she feel comfortable and trying our best that she mustn't worry, she [Donaldson] will soon come home. We try fi do everything fi she feel like hope is not gone. We try to ensure that she is on a healthy balance," Lugg told THE STAR. She indicated that the support from Jamaicans has grown tremendously, with each protest garnering more people's attendance.

"Jamaica is really putting out the effort because over England, right now in London, they are having a march for her over there right now and they are putting up a fund-raiser for her over in England," she related. Lugg said the family is still clinging to the glimmer of hope that Donaldson is alive.

"This doesn't feel real, it is an unexpected thing. We know any day now we can expect anything but truly, deep down, we still hoping that, somewhere, somehow, wherever she is, if she is still alive, we want her back, and if she is not, we still want her back," Lugg pleaded.