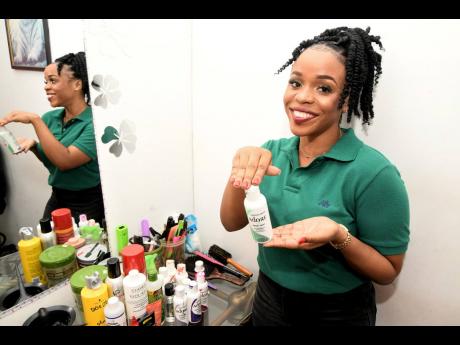 Hibbert, known as Shanz, showcases the now empty bottle of hairdye she used to create one of the three coloured masterpieces the world champion is wearing this season. 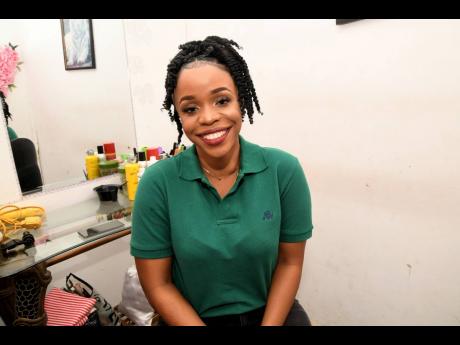 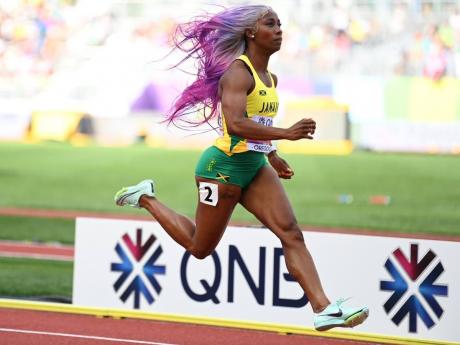 Shanz was responsible for colouring this showstopper of a wig, worn by Shelly-Ann Fraser-Pryce in the first round of the women’s 100 metres at the World Athletics Championships. 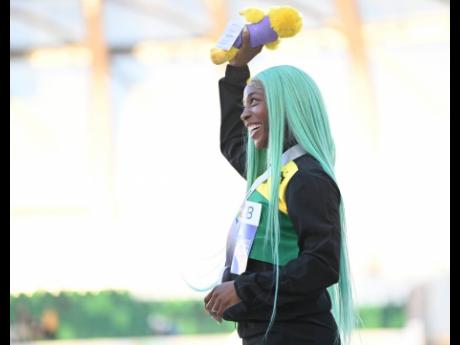 Jamaica’s golden girl, Shelly-Ann Fraser-Pryce, in her aquamarine-coloured hair, done by Shanz, at the medal ceremony. 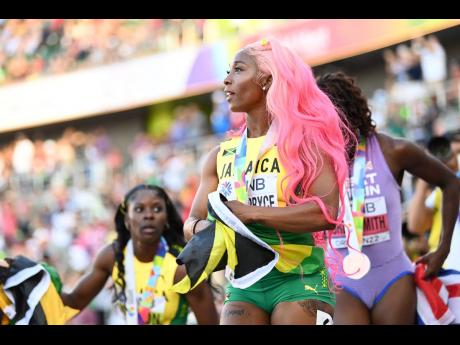 Shelly-Ann Fraser-Pryce celebrates her silver medal in the 200m with her another eye-catching wig.
1
2
3
4
5

As Shelly-Ann Fraser-Pryce takes the world by storm, her colourful wigs have been at the forefront of everyone's thoughts and admiration. The mastermind behind some of these iconic creations, Shanie Hibbert, shared with THE WEEKEND STAR her experience working with the five-time world champion.

"I've known her for quite a while, but I started doing her hair back in 2020 -- the early part of 2020 when she messaged me on Instagram. She wanted some braids. So I went by her, I did her hair and everything, and she was very pleased," Hibbert said.

Like Fraser-Pryce, Hibbert hails from the gritty inner-city community of Waterhouse, St Andrew. She knew from around 12 years old that hair was her passion, and she grabbed every styling opportunity that came her way.

"I've been doing hair since I was a child. I first did a hairstyle for my cousin when I was 12 and everybody couldn't believe that a 12-year-old did that hairstyle. So from then, I realised that that has been my passion, and I've been doing hair ever since," the Meadowbrook High School past-student said.

Honing her skills while attending high school, by the time she left Meadowbrook with eight Caribbean Secondary Education Certificate passes, Hibbert was ready for the fashion business. Her crowning came this week when the show-stopping Fraser-Pryce, who was being interviewed by NBC, sang her praises.

"I had my hair done, coloured from home by Shanz, who is my friend from Waterhouse where I am from. And I packed them and I had different hairstylists here actually install them," the champion sprinter said.

Fraser-Pryce has so far worn three wigs at the championships that were done by Hibbert. These are the pink and purple fusion, which was worn on Fraser-Pryce's first day of competition; an aquamarine number, which was brought out for the 200m heat, and a stunning pink hair, which Fraser-Pryce donned in the 200m finals on Thursday night.

Hibbert, who operates from her home in Waterhouse, said that getting that big-up from Fraser-Pryce during that NBC interview made her feel real special.

"I felt so good, listen I was lost for words. A lot of people sending me the video, congratulating me and everything, so you know I'm very happy for the that," the 25-year-old hairstylist said.

"I definitely think that was a great impact because a lot of people sending me her pictures and saying, 'Oh, I want this style that you put in Shelly's hair'. There was a specific comment from a lady that said it was Shelly's hair that sent me over to your page, so I think it was of great effect," Hibbert said.

"I was so elated, this has always been my dream to work with the elite and I'm very proud of myself and I'm very grateful for the platform from Shelly-Ann," she said beaming.

The gifted hairstylist, meanwhile, has sought to clarify the 'me nuh memba di girl name' comment, which Fraser-Pryce made after she was asked by a fan who is her stylist. The superstar athlete was taking pictures with fans and was enjoying the moment when the question was posed. According to Hibbert, 'Mommy Rocket' was not referring to her.

Even though she is not responsible for all of the wigs Fraser-Pryce has been sporting at the championships, Hibbert says the two keep in constant contact to ensure there are no hair mishaps on and off the track.

"We talk very often. She calls, she do her little check-ups. I check up on her to see how the wigs going, how they installing it and everything, make sure she's pleased and everything."