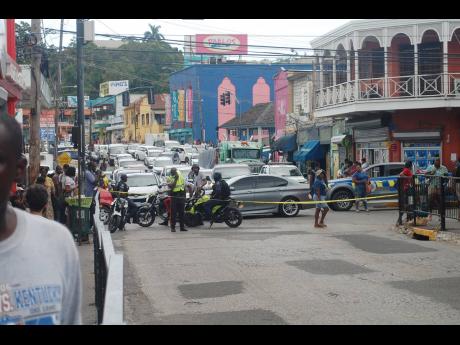 Police at the scene of a gunfight that unfolded in Sam Sharpe Square, Montego Bay, on Tuesday. 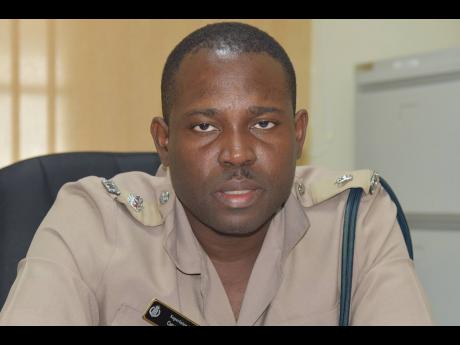 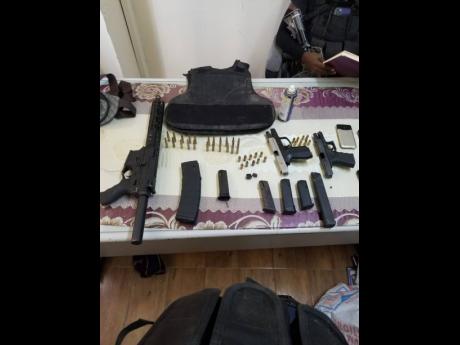 Guns found by the St James police in Granville earlier this year.
1
2
3

According to the Jamaica Constabulary Force (JCF), 116 people have been killed between January 1 and July 16 in St James, which represents a 22-per-cent increase over the numbers recorded last year during the corresponding period.

Superintendent Carlos Russell, the division's acting commanding officer, conceded that the murder figure was unacceptable and credited the blood spill to a high level of gang conflicts across the parish.

"Almost every community that you can think of has some form of gang operating there. This is what we have working with," he said, adding that Anchovy and Retrieve have joined a long list of troubled communities. "We have Flankers, Granville, Salt Spring, Norwood and Mount Salem as areas with traditional conflicts and flare-up of violence. But even though the JCF does not have infinite resources we are using them as best as possible in the areas that we believe need them most," he said.

Russell, who has been in the hot seat for a little over a month, said that it is going to take more than just effective policing to rid St James of criminality. He reiterated the adage that the solution to a civilised society starts from the home.

"It has to start right back in the homes where we look at how we deal with children and how they are raised. A lot of our young men who are now involved in criminal activities, they are not under any sort of guidance. They have no father figures in their lives, they are just loose out in the streets and many of them are not in schools," Russell told THE STAR hours after two alleged licensed firearm-holders shot each other in downtown Montego Bay on Tuesday. He lamented the "gun culture and the badman culture" and said Jamaicans don't know how to deal with conflict.

"St James is a place that has a lot of gangs, but we are seeing results, and as you know, there are always conflicts like the one we saw today [Tuesday] with this shooting between two persons that we would consider to be sober-thinking persons, and the ones stemming from gang conflicts," he said. However, the senior crime-fighter said he was motivated and will be relentless in his approach to take the fight to criminals who continue to create mayhem in the parish.

"We are maintaining a presence in the hot spots, the town centre and we are doing some serious work targeting the gangs and you can see by the results that a lot of these gang members are now in custody. They are charged and we are also recovering the weapons. St James as a parish has recovered the most firearms in the island," he said. Since January the police have recovered over 90 illegal firearms and 1,500 rounds.