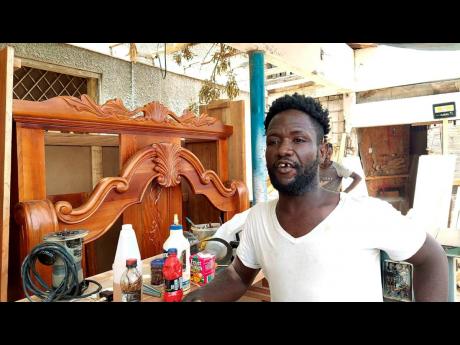 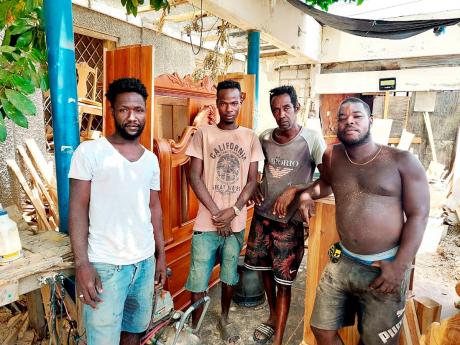 Richard Campbell, the man who recovered an M-16 rifle and a handgun that were assigned to a policeman from the scene of a nasty accident in downtown Kingston on Friday night, said he is not expecting any reward for his patriotic act.

The 31-year-old who handed the weapons over to the police said that his decision to retrieve the guns and hide them away until law enforcement officers appeared was motivated by national interest.

"Me never do it fi expect anything," Campbell told THE WEEKEND STAR even as he surmised that persons may have sold the weapons to players in the criminal underworld. "Mi could a tun a way and sell it, but mi give dem back the guns and deh yah same way a do the good."

The young carpenter said that he would welcome any assistance that could help him further his professional advancement.

"If something come, I will willingly accept it. Anything weh affi do wid woodwork, even some board or tools. That would be the best reward yuh could a ever give me, because, if yuh give me cash, tomorrow it done," Campbell said.

Meanwhile, Campbell said that he is yet to be contacted by members of the hierarchy of the Jamaica Constabulary Force about his role in helping the injured cop and securing the weapons, which could easily have fallen into the hands of criminals.

The police have been tight-lipped about the crash which saw the cop, who was returning to base, being knocked off his motorcycle. He sustained injuries to his neck, legs, arms and head. Campbell witnessed the incident which took place sometime after 11 p.m. He said that he was sitting on a stool about 50 metres away when a car slammed into the policeman's motorcycle.

"When mi reach dung deh, di way the place blood up it come in like a shot di police officer get, enuh. Bike mash up and everything," Campbell told THE WEEKEND STAR.

"When him try come up pon him two feet, a so wi realise say dem bruk up enuh, because wi couldn't get him to stand. A couple more people did deh pon the scene, enuh, but hear wah gwan, some man never wah put the blood up man inna dem car, and a di same taxi man weh policeman would tek set pon to, enuh, a him put him inna di car and bring him go hospital," Campbelll said.

The former Haile Selassie High School student said he immediately checked to see if the policeman had a pulse. Then, right before a crowd began to emerge, he quietly removed the weapons from the the scene and stored them until the other lawmen appeared.

"Likkle after mi secure the gun, a bredda drive up inna one unmarked car a say him a police and a ask fi di gun. Mi tell him say mi couldn't give him the gun without him show mi an ID, worst the place dark up. Him go inna the back a him car and find the ID, and a so me give him one of the guns," said Campbell.

He said that the rifle was handed over to a police unit minutes later.

"Every day, my father and mother instilled strong values. Not because mi come from Greenwich Farm it mean say tru mi find two guns mi a guh do sumn bad wid it. A nuh me that. Mi decide fi give it up and continue me journey 'cause a right yah so me come and earn a honest bread every day," Campbell remarked.

Campbell's father, Richard Snr, also a carpenter, said he was very proud of what his son did.

"Nuff man wouldn't do weh him do still, so it make me feel very proud. Mi tell him that straight. Mi have another son who is a soldier, and a daughter who works at Customs. Dem always see dem parents do good, so dem expected to do the same," the 55-year-old said.