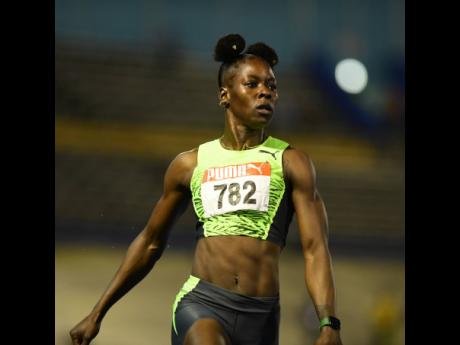 Shericka Jackson storms to victory in the women’s 200m finals at the National Trials. 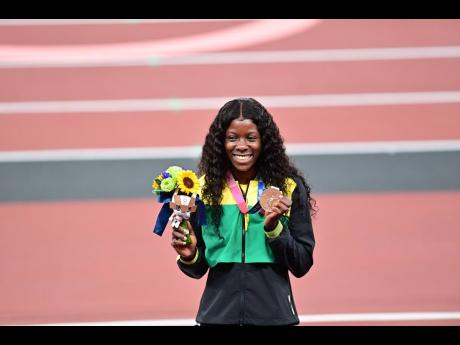 Shericka Jackson shows off her bronze medal for the 100m, in which Jamaica swept to a 1-2-3 finish. 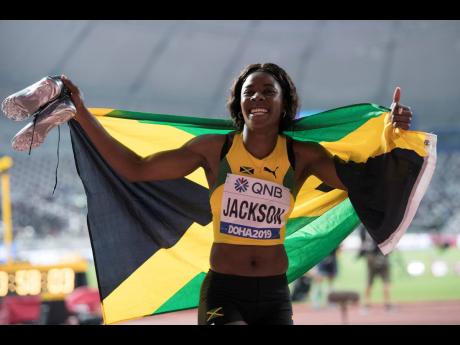 Jackson celebrates after placing third in the 400m at the 2019 World Championships in Doha, Qatar. 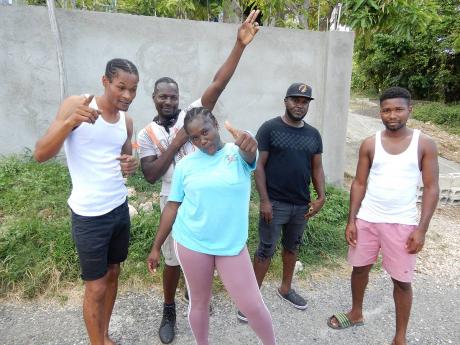 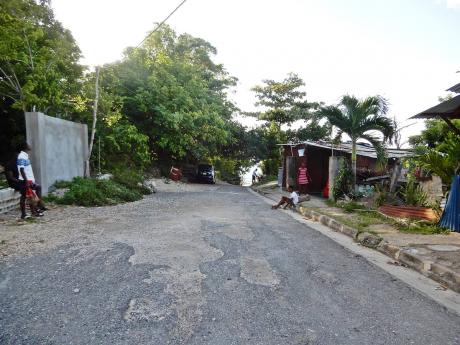 A section of the Shaw Park Heights community. 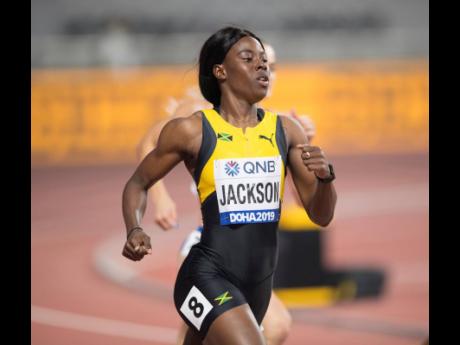 No one in the Marl Road area of Shaw Park Heights, Ocho Rios, St Ann is surprised by Shericka Jackson's success on the track -- they knew it was bound to happen.

Not only did the Olympic medalist and national double sprint champion declare it from a tender age, but her habit of constantly running to just about wherever she was going, made people believe it was a certainty.

Jackson, who turns 28 this month, has medalled for Jamaica at all levels from the CARIFTA Games to the Olympics. Among her achievements, she took gold as part of the 4x100m relay team in the 2020 Olympics in Japan, as well as the 2019 World Championships in Qatar. She was also part of the 4x400m gold-winning relay team at the 2015 World Championships in Beijing. Individually, Jackson has several gold medals from the CARIFTA Games in the 200m and 400m, Pan American Games (400m, 2019) and North American, Central American and Caribbean Championships (200m, 2018).

And as the former 400-metre runner turned 100 and 200m specialist takes aim at gold in the World Championships in Oregon, USA, there is no pressure, but expectations are high for the former Vere Technical High School athlete.

"Everybody bout yah respect har. We have har as a legend bout yah," said Ricardo Scott while adding that her propensity for speed was noticed from she was a child.

"Har father love har, when him a go a shop him always have har pon him shoulder a walk wid har. If him nuh have har, she a run come a shop an she a run go back home, so everybody see har as a likkle track star from then, so nobody nuh surprise seh she mek it this far," Scott added .

Keno Roach went to primary school with Jackson and he recalls the times they would sprint on the rough road.

He recalled, humourously, the day he hit Jackson and believed he could get away by outsprinting her. He couldn't have been more wrong.

"She run mi dung, a one ah di best beaten mi ever get from a girl," he recalled.

Like the entire community, Roach is proud of Jackson and her achievements.

"Mi proud ah har an glad fi see wha she a do for har country, and how she elevate an a uplift herself and everything, an mek everybody inna di community proud ah har," he said.

Godfrey Runners is another community member who is absolutely proud of Jackson. He said he used to be faster than her -- but not anymore.

"Mi proud ah har fi dat still, yuh know. Right now, she mek we feel happy out here inna Jamaica, mi a tell you. Mi like it an just hope she continue an jus do di right ting an mek we continue proud ah har an ting," he added. Then he sprinted up the road to show he's still got some speed left.

Last year, after Jackson medalled at the Olympics, her childhood friend Shantell Powell was caught on video clanging pot covers in celebration, in a clip that was widely circulated.

Powell is getting ready to bang those pot covers even more loudly this time around as she believes her friend will do extremely well at the World Championships.

Addressing Jackson, she said: "Yuh know yuh a go a World Champs an we know we a guh get bigger than wha we get last week Sunday at the stadium, an yuh know dat nuh normal."

Jackson ran the third fastest 200-metre time in history at the National Trials, finishing in 21.55 ahead of Elaine Thompson-Herah (22.05) and Shelly-Ann Fraser-Pryce (22.14). She now sits behind only world record-holder Florence Griffith-Joyner (21.34) and Thompson-Herah (21.53) on the all-time list.

"Yuh see my fren, mi nuh surprise a nuttn wha she do. Me know seh she could a do dis [national double sprint champion] long time, cause a nuh jus today we a fren, we a fren from longer, longer time. Mi proud a har, mi couldn't feel no betta than how mi feel right now," said Powell.

Community members said they are asking for help to erect a banner recognising Jackson's achievements, to be placed on the road leading into the community. They said this would be a first step to a more meaningful recognition, that of a statue.