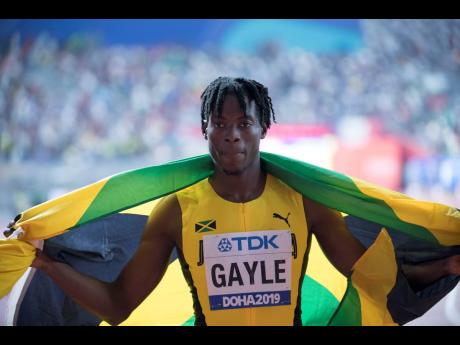 Tajay Gayle celebrates winning the the men’s long jump finals with a jump of 8.96 metres at the 2019 IAAF World Athletic Championships in Doha, Qatar. 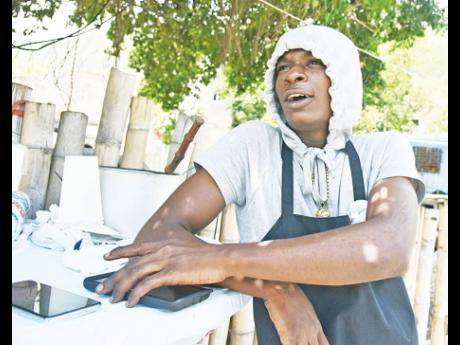 Lowe said that there are many other talented persons in their community who can achieve greatness. 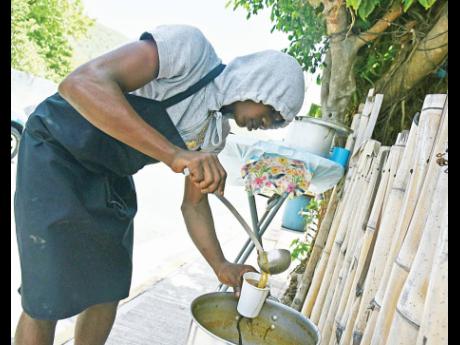 Shaquelle Lowe, who says that he looks up to World Champion long jumper Tajay Gayle, serves up a cup of his tasty soup.
1
2
3

For 19-year-old Shaquelle Lowe, the desire to become a world-renowned chef was a distant dream, until he saw his fellow August Town, St Andrew native Tajay Gayle leap for gold at the 2019 World Championships Games in Doha, Qatar, in the long jump.

"Greatness deh inna di place, enuh, but because yuh might have certain people, yuh know; as dem say, 'one bad apple spoil the whole bunch'. Vietnam (officially known as African Gardens) is one of the safest places in August Town and a nuff talented youths deh here like Tajay," said Lowe, whose sojourn in cookery began two years ago on the streetside as a soup vendor.

"But now, every weekend me and mi friends dem jerk chicken, pork, chicken back; fry up festival and dem things deh for the people in the community; and everybody love it," added Lowe, who said he has recently signed up with the HEART/NSTA Trust to enhance his culinary skills.

"From wah day one likkle HEART programme a gwan, and dem kinda tek up the youth dem off the corner weh nah do nutten fi get a skill and thing. Dem call me recently and say me fi send in me TRN [tax registration number] so that me can register. Wah day mi go orientation fi three day, so mi a really look forward to it. Mi see it as a way to get certified and improve miself, because the dream is to become international like Tajay," he said.

When our news team visited the community of African Gardens, we were given a warm welcome by the residents, who hailed Gayle as their "champion boy".

"Tajay is like a motivation fi me, because if yuh tell him say yah do something, he is a man weh will give yuh encouragement fi mek yuh push towards weh yah do and achieve your goals. And as you know, him represented us here, and the country, well inna 2019," Lowe added.

Vietnam has been known to have sporadic violence, and the small community remains largely underdeveloped. Many of the residents there have had to make the most of its impoverished environment, characterised by zinc fences and several unfinished housing structures.

But Lowe, who is also proud to share an alma mater with Gayle, namely, Papine High School, said there are many unknown, talented persons in inner-city communities who are being overlooked because of their addresses.

Lowe was 16 when Gayle won in Doha. But while he admitted that he is not a big sports fan, he will be tuning in to the 2022 World Championships, which begin this Friday, to cheer on Gayle, although the 26-year-old is in doubt of performing due to injury.

"I am expecting another gold enuh, although he is not as fit as he was in 2019. A good while now since me no see him inna di place, because mi would love fi give him my blessings. But is a youth weh well determined and thing, so if him do perform, a only gold me expecting," he said.