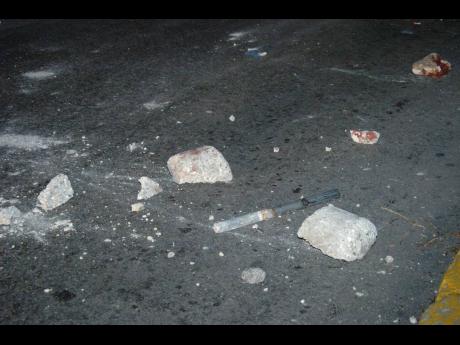 The accused woman allegedly threw stones at a car causing damages of $355,000.

A Corporate Area woman allegedly assaulted her children's father and his new girlfriend as well as threw stones at their car causing damages of $355,000.

This was shared by prosecutors yesterday in the Kingston and St Andrew Parish Court after the accused, Tenicha Ennis, appeared to answer to a charge of malicious destruction of property. It was alleged that on May 26, the complainant was in her Honda CR-V motor vehicle with a man who Ennis was previously in a relationship with. The complainant indicated that both herself and the man were at a property when she heard someone shout "Dah boy deh [the name of the man], he's a waste man. Me ago f**k yuh up and yuh gal. Me ago kill unnu."

The complainant, in her statement, alleged that the accused threw stones, which fell about five feet away from her but another stone hit the man on his hand.

While assisting the man to her vehicle, the complainant indicated that Ennis ran to the passenger side of the vehicle where the man was now seated with stones in her hand and started to bang on the window. Ennis, it is alleged, then punched the complainant in her chin and said "Move outta me b********t way, me ago kill yuh too," and continued to bang on the window with stones in her hand.

The court heard that the accused forced herself into the vehicle and hit the man. A struggle ensued between them and Ennis was removed from the vehicle. But she used a stone to hit the windscreen. She did not enter a plea when she appeared before Chief Parish Judge Chester Crooks and her attorney, Janoi Pinnock, requested an adjournment to facilitate further discussions with his client.

In the meantime, Ennis was made the subject of a fingerprint order and was ordered to report to the police once a week. She was also ordered not to have contact or communication with the complainants. The matter is to be mentioned on September 15.