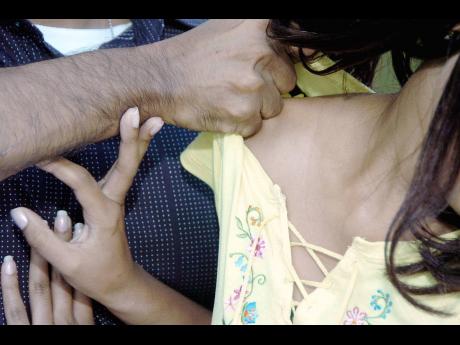 A Corporate Area father was ordered to attend counselling after he admitted to beating his child's mother for not washing their 11-month-old's clothes.

Orlando Mitchell pleaded guilty to two counts of assault occasioning actual bodily harm in the Kingston and St Andrew Parish Court yesterday. The court heard that Mitchell and the complainant had a quarrel in which he accused her of not washing their infant's clothes. A fight ensued and the complainant was hit in the forehead. The complainant's sister heard the confrontation and tried to intervene. It was reported that Mitchell used a bench to hit the sister on her leg, causing bruises and swelling. Because of his guilty plea, Mitchell was given the opportunity by Chief Parish Judge Chester Crooks to explain himself.

"Me ask her to wash the clothes, Your Honour, because from the yute born a me a wash him clothes. In a the morning now, she a say me fi wash dem and me say 'No, me nah wash dem, a you fi wash dem'. She a friend me up an' me say 'A you fi wash dem man, gwan go wash dem.' A one suit a clothes did lef, Your Honour, and me get vex an' say 'Gwan go wash dem nuh man, weh him [the baby] a guh put on? Him nah nuh more clothes fi put on' and a deso me and her kick off, because she never go wash the clothes when me ask her," he said.

"So you throw the first blow and then the sister comes to part it and you take it out on her?" Crooks asked.

"All di while when me and mi babymother have things, she always hold me by my neck. So me see her a come and me nah mek she hold me, so me tek the chair and fling it offa her and she sight it. So me a go into the house now, and she grab me by my neck," Mitchell said. The complainant informed the court that she was still in a relationship with Mitchell and it was the first time that he laid hands on her.

Crooks referred the matter to counselling and requested a special report for Mitchell. He was also made the subject of a fingerprint order and had a bail condition attached that he should not interfere with the complainants. Mitchell is to return to court on October 18.