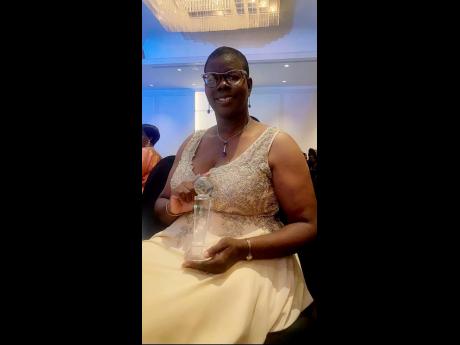 Julian Davis-Buckle shows off her Woman of Courage Award. 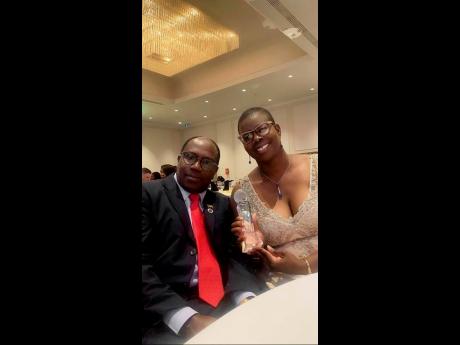 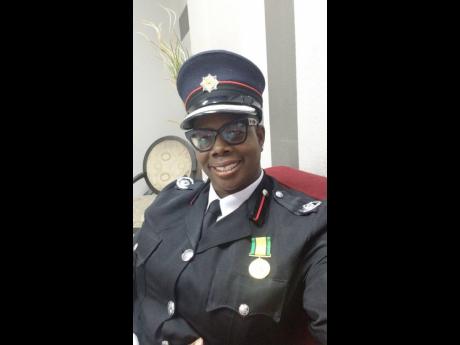 A burning desire to serve her countrymen was the influence for Julian Davis-Buckle to have a career as a civil servant, specifically as a member of the Jamaica Defence Force.

"I was a tomboy, love to play gun war, police and thief, and climb trees. I wanted an active career in the army," the Williamsfield, Manchester, native told THE STAR.

But she was denied entry into the island's military. Still determined to serve, she enrolled herself at the Bethlehem Extension College to complete studies as a physical education practitioner. Yet she still could not quell the fire to serve and as fate would have it, an opportunity presented itself in the Jamaica Fire Brigade (JFB).

"But it nearly slipped though after I was denied entry at the interview stage. I was forthright and confident that I could not fail the interview, so I purposefully approached my interviewers to enquire where I'd fallen short. I was advised that my lanky frame would not be able to manage the rigours of training," the Knox College graduate said.

Through much persuasion, Davis-Buckle told the panel of her athletic prowess and assured them that she would excel in training.

"After much deliberation, the chairman said 'Gwan a blood bank'," indicating her admission to the next phase of recruitment. By September 1995, she was one of the 120 new recruits to the JFB and three months later, she was commissioned into the service. Since then, she has become a trailblazer, having received her first promotion to lance corporal in 1999, and is now an assistant commissioner. During her 27-year career, Davis-Buckle has achieved many 'firsts', among them being the first female to ride a fire unit in Manchester and the first female officer for the parish.

"My first task was a hydrant test at the back gate of the Mandeville Fire Station. I was tasked to carry the smallest tool but I complained to my officer that I wanted to carry the hose and the nozzle. It was to that point they knew I was there on business and not to be pampered and treated like a girl but as a trained firefighter," she said. She recalled tackling her first blaze which was a bush fire in South Manchester.

"It was my baptism to the reality of what awaited me in this career. It was no turning back from there," she added. A transformational leader equipped with soft skills such as empathy and emotional intelligence, Davis-Buckle said a firefighter must be respectful, proactive and observant.

And she has held true to her words, as she is the first appointed female superintendent in the 150-year-old fire service and is the only female at the rank. She is currently in charge of Area 2, consisting of Trelawny, St Ann, St Mary and Portland. Though her job may be to oversee the operational and administrative functions of those parishes, the mother of two has to ensure that the resorts and attractions are safe for residents and tourists. Despite her workload, she gives voluntary service with the Jamaica Red Cross or the Kiwanis Club of the JFB Kingston. Davis-Buckle holds a bachelor's of science in business administration, a master's in disaster and emergency management, and is a graduate of the Fire Service College in London, where she studied international divisional command. Her most recent accolade came when she received the Woman of Courage Award at the International Women Achievers Awards in Canada.

"I love giving service. Being selected for this award was an eye-opener for me. I am being viewed not only locally but on the international platform. I am humbled by it, not only for me but for all female firefighters, not just in Jamaica but the Caribbean," she said.