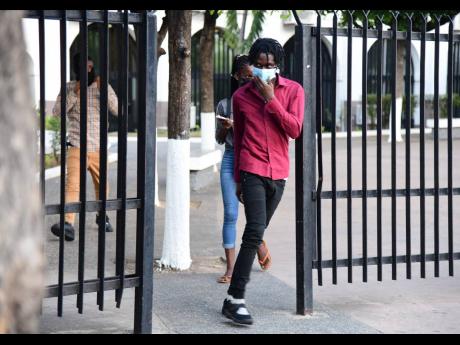 Roshane Williams, one of four alleged members of the Clansman-One Don Gang, departs the Home Circuit Court in Kingston on Thursday. The defence were successful in arguing that there was insufficient evidence. The trial will continue with the remaining 29 defendants.

Cheers erupted outside the Supreme Court yesterday as relatives and friends got wind of the news that their kins were among four persons in the Clansman-One Don Gang trial who were freed.

Damaine Elliston, Rivaldo Hylton, Rushane Williams and Owen Orsmby were found not guilty by Chief Justice Bryan Sykes after the prosecution indicated that it did not have enough evidence to prove its case against them. Ormsby's partner said: "We jump and shout fi joy when we hear say dem free." She jigged with joy as she made regular checks to see if the police had finished processing him so that he could be released.

"I feel good say him a come home. Mi never expect it today but mi did have faith say him a come. But mi never tell mi self say a today," she said. "But mi pray about it and mi go church and send dung di prayers fi dem." When asked how she planned on celebrating his freedom she laughed while saying: " Mi caa tell you di plan the way mi feel good."

Ormsby, who was showered with hugs when he finally emerged from the courthouse, told THE WEEKEND STAR that he is overjoyed and sees this as a second chance.

"I plan to make the best use of this chance," he said. "God a God and mi give thanks. Mi never expect this today but mi feel good."

However, he said he plans to migrate as nothing good is in the country. He said that he was wrongly charged because of his friendship with some of the remaining defendants.

Elliston said he could not wait to be reunited with his six-year-old daughter. The 26-year-old, who said he had spent five years and five months in jail, said he wishes a similar fate for the other defendants and warns youth to stay away from crime.

"Badness nuh pay none a tall. Just stay inna school like Kartel say and get you education and mek you parents proud," he advised. Meanwhile, Elliston said he will use this opportunity to continue his livestock farming. The trial will resume on Monday with the continuation of the no-case submissions.