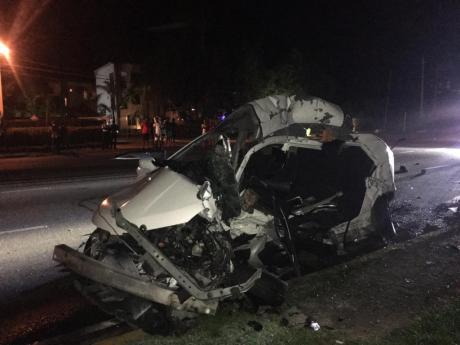 Two men died from injuries they sustained in a motor vehicle accident which occurred along a section of the Rosehall main road in St James, on Sunday night.

According to the Coral Gardens police, shortly after 11:00 pm, the driver of a white Nissan Tida motor car was travelling along a section of the Rosehall main from the directions of Lilliput towards Montego Bay.

On reaching the vicinity of the Coyaba resort, the driver of another motor car attempted to overtake and slammed in the rear of the Tida, resulting in the driver loosing control and crashing into a silver Grey passenger minibus, which was also travelling in the same direction.

The driver of the Tida motor car and a male passenger sustained serious head and body injuries and were killed on the spot.

The driver of the minibus and two other passengers sustained serious injuries and were rushed to hospital.