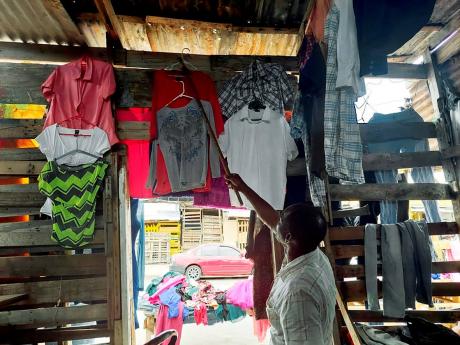 A vendor shows the few clothing items he was able to save. 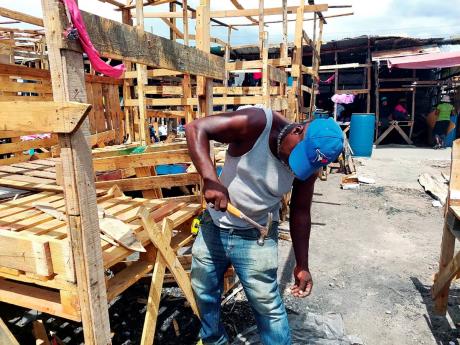 A repairman hammers away at a stall at Ray Ray Market in downtown Kingston. The market was razed in February. 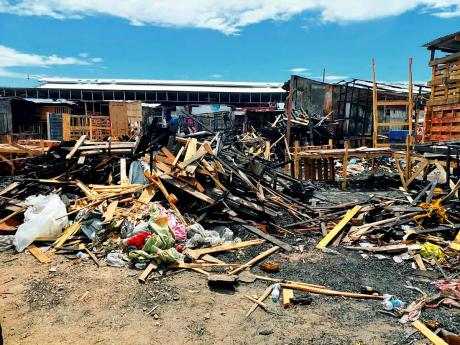 Vendors are still picking up the pieces after the recent fire at the Ray Ray Market in downtown Kingston.
1
2
3

Even as they struggle to regain their footing, vendors who were displaced by fire at the Ray Ray Market in downtown Kingston two weeks ago are fearing the future as the site may go for good.

The Kingston and St Andrew Municipal Corporation (KSAMC) is making plans to use the land space for a parking lot and taxi bay. Clavia, 63, has been selling inside the market for more than two decades. She said that it's the 15th time that she has suffered such a setback, which has cost her hundreds of thousands of dollars in damages.

"If dem ago tek di land dem need fi find somewhere and put us because at least our customers dem would know say a over deso wi deh and still come and support us. If dem really ago do that, dem also need fi ensure say dem give us enough time to prepare wi self," she said. "A decent size stall like weh mi did have is not cheap to build because the pallets dem a sell fi all $300 fi one. The nails dem expensive also. Then yuh affi find $15,000 just fi the workman. Mi lose everything and mi no have it like that, enuh."

One vendor who identified himself as Garnett said he has no other source of income.

"Bwoy, mi no know weh fi tell yuh but mi think dis yah market yah cursed. Dis a bout the third time mi get burn out, enuh, and a regular di market get burn dung. Right now about five customers mi get since the fire so yuh can imagine how the business stay," he said. Many of the vendors, including Sherice, who has been selling there since the mid-90s, are also arguing that they have been treated unfairly. They claimed that they haven't received any support from the relevant authorities despite paying a daily market fee of $300.

"Is like me need fi go up a di prime minister office or upper him wife house and protest wid mi placard because up to now nobody no come say dem a help wi fi rebuild. Wi pay wi market fees a day time and yearly registration fee but dem think say that count for nothing," she said.

Dalton, another vendor who also does carpentry work, said he has had to offer his services at a reduced cost as many of his peers are struggling to restart their businesses.

"Most a di stall dem weh yuh see a build up back, a me a do it. But mi cyah too charge dem because everybody get hit and it no easy fi start over. Dem just provide the materials and mi get it dun for them," he said.

Kingston's mayor, Councillor Delroy Williams, said recently that for some time now, members of the KSAMC have discussed the idea of changing the purpose of the facility. His sentiments were echoed by Desmond McKenzie, local government minister, who said he has met with the KSAMC to share his opinion.