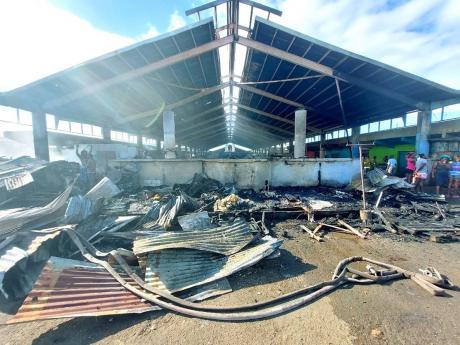 The burnt out Oxford Mall. 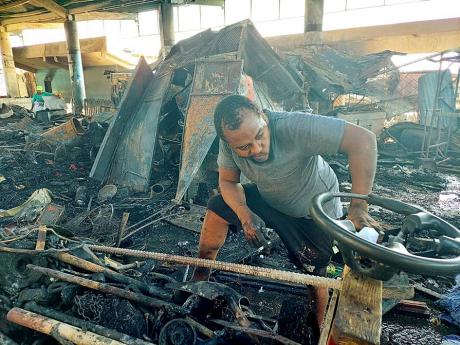 Bob, a vendor in the Oxford Mall, contemplates how he will be able to start over following the fire. 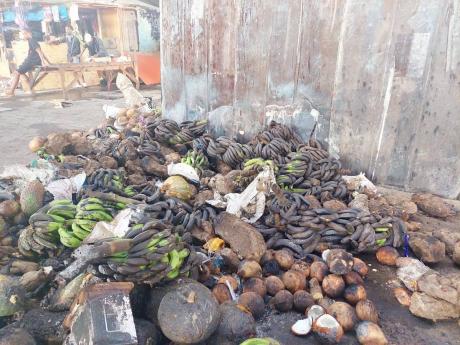 Burnt produce that was taken from the rubble.
1
2
3

Ten months after her shop was destroyed by fire, Dawn Wilks is again in limbo following another major fire inside the busy Oxford Mall in downtown Kingston yesterday morning.

The fire reportedly started at 4:30 a.m., leaving 66 vendors to pick up the pieces. A tearful Wilks, whose shop was one of 12 that was damaged when a fire destroyed a section of the market last April, was anything but herself as she watched men search through the rubble. To make matters worse, the distraught vendor told THE STAR that she is still repaying a loan that she took out to rebuild after last year's setback.

"Mi still no recover from last year enuh. It never tek mi long fi rebuild cause mi did get di money fi borrow. A more than $500,000 mi tek out fi start over and mi still a pay off dah loan deh. I don't know what to do or where to turn right now," she said. She was, however, thankful, given that some vendors have been worse affected.

"Last year, mi did burn out flat and God gave me back a start. The beauty about it this time is that the refrigerator is not damaged. Last year I lost two. This year, a di goods dem but di appliances dem ago need some inspection," she said.

Bob, 37, cut a dejected figure when our news team arrived at his shop which he operated for 20 years. He sells a variety of electronics, household and non-perishable food items, as well as custom-made handcarts. The father-of-two said he relies on his business to provide for his family and has lost millions.

"Mi cyah even estimate it. Mi a tell yuh say dis ago set mi back wicked cause from mi a boy mi deh yah so. A it a mi hustle, mi no know bout nutten else. A it mi use and tek care a me two sons dem. Mi have all $380,000 lock weh inna di shop and the way how mi mind tun fool when mi see the fire, mi run out and no memba it," he said.

The St Catherine businessman said he was unable to save anything as the piercing flames emanating from the fire was too severe.

"Fi fire a run from inna di ceiling as well. A ya so mi deh when mi see the flames start go up enuh. A gas fire that, no electric fire, due to how it come on quick and powerful. Mi couldn't save nothing mi bredda, believe me when mi say that," he said.

Jamaica Fire Brigade District Officer Francisco Bennett, of the York Park Fire Station, told THE STAR that items worth millions of dollars went up in flames despite the best efforts of firefighters, who came from seven units based in Kingston, St Andrew and St Catherine.

When the news team arrived, Bennett and his colleagues were carrying out cooling-down operations while vendors and concerned bystanders looked on.

In last April's fire, an estimated $10 million in losses was incurred. Just last week, vendors at the popular Ray Ray Market, also in downtown Kingston, were also affected by a fire there.