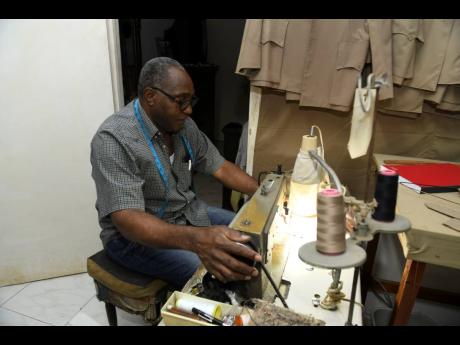 Despite the long hours, Smith is dedicated to making his creations fit to perfection. 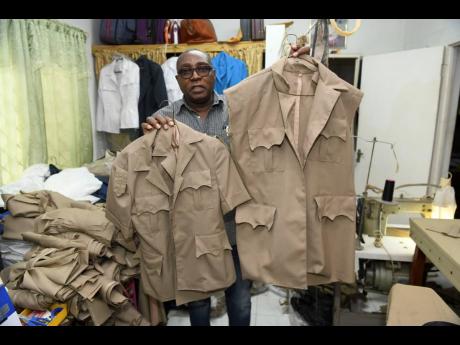 Smith shows off some of his work. 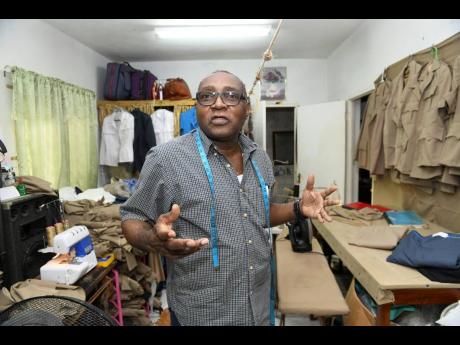 In March 2019, Inspector Michael Smith retired from the Jamaica Constabulary Force after 36 years of service.

But aside from his diligence in the job, Smith is best known for helping to keep hundreds of his peers looking sharp in their uniforms.

"There is nothing like a neat policeman out there. If you don't look neat, people will not respect you. Yuh cyah have anyone out there saying 'look how dah policeman deh dutty'. I believe that, as a policeman, yuh must always attire properly," the 62-year-old told THE STAR while sitting in his St Catherine residence.

Smith began his adventure in tailoring at age 14, on January 14, 1974 while growing up in Rose Hill, Clarendon.

"There wasn't anything much to do in the community and I didn't want to get idle so I said to myself 'Let me learn tailoring'. Growing up in those days you would wear some pants weh tear up so I would normally tek mi needle and patch it up. Sometimes yuh look on the pants yuh see all six different pieces of colours when yuh dun patch it," he said. One of his mentors was the late Robert Campbell who gave him the chance to learn the trade. From there, Smith started to hone his craft, which he carried on even after joining the police force in 1983.

"An officer friend Kenneth Wright knew I was a tailor because I used to sew a lot of pants for him. So he encouraged me to do it," recalled Smith, who oversaw operations at the Newport West Police Station for seven years before his retirement.

On his industrial machine, Smith often finds himself devoting long hours to ensuring that each piece of garment is properly stitched. He admitted that he feels privileged to have the opportunity to stitch the khakis and denim trousers for his former colleagues, despite the tedious nature of his job.

"It is not as easy as it looks. Just the top alone, to sit there and sew, you can't do it under four hours. The crown flop is technical and that is why you don't have a lot of people who make those types of uniforms. It's love, enuh, and I have to give God thanks for strength that I can keep going. Sometimes I have another person to come and do some hand work but because the work is so technical, you can't just give it to anybody like that to sew," he said.

He has sewn for some of the most noticeable police personnel and he usually gets rave reviews.

"You have Superintendent Harry Daley, who just left to take up position in St Elizabeth. I had to rush some uniforms for him the other day. Then you have Senior Superintendent Marlon Nesbeth from St Andrew Central; he is my good customer and friend. I could also mention the commissioner [Major General Antony Anderson] as well. When he was taking the office, I had to rush a lot of uniforms for him; he is a nice gentleman," he said.

Smith believes sewing has played an integral role in his life and added that it was his unending love for the trade that has kept him going even in retirement.

"I love to see that when I sew the clothes and personnel put it on, it looks good on them. I have been enjoying it over the years."