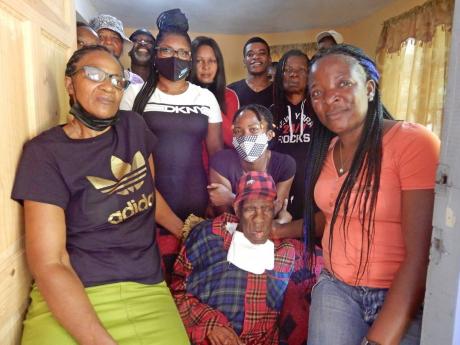 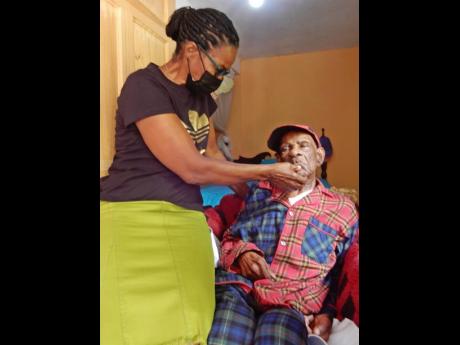 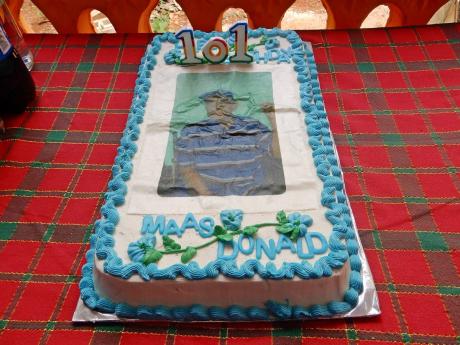 When Donald Campbell marked his 100th birthday anniversary last year, several of his relatives who live overseas weren't able to attend the celebration because of the coronavirus.

This year though, they said that they had to be there for birthday 101. Last Tuesday, the family marked Campbell's special occasion with food, music and lots of memories in Hammerton, which is located a few miles from Alexandria, St Ann. Campbell's birth date is February 16, 1921, but the celebration was held a day early to facilitate some of the visiting relatives. With his failing health, Campbell sat out most of the celebration and his stepdaughter and caregiver, Melrose Lamey, spoke on his behalf.

"I knew him from I was about six years old because I remember when I started infant school, he was the first male in the family with my mother," Lamey disclosed. Campbell was born in Muirhouse, Buxton, St Ann, to Levi and Margaret Campbell and is the only living child from the union.

"Everybody knows him 'cause when he was on the road, he was jovial. He bought this piece of land; when we moved here, it was only like two rooms. People who he raised like my sister's kids and everybody come together and it's liveable right now," said Lamey. Campbell worked hard and did several jobs in his younger days, including working in a bakery, farming and sweeping the streets. Over time, he became well-known and well-loved in the community, especially among the schoolchildren.

"He would have like pencils and stuff in his pocket and if he sees a child crying and the person would say, 'I don't have any pencil,' a pencil would be out of his pocket long time. If it's lunch money, it was out of his pocket just the same; he's very helpful," said Lamey. Yvonne Haynes, Campbell's first granddaughter, said he raised her from she was three months old.

"It's been hard to see him like this but I would do anything for him and so it's like we have a bond. This is his 101st birthday. We've been trying to do celebration but because of COVID ... we tried last year, we tried this year, but this is a scaled back [version] from what we really wanted for him. But at least we're here as family with him to celebrate this milestone with him."

Campbell's grandson Anthony Benjamin said that he could not miss the special occasion.

"I missed the 100 but I couldn't miss the 101," he stated. "It's a special occasion. So I had to make sure I'm here just to spend some time with him, enjoy myself with him and some family members, too, that I haven't seen for a long time."

He added "He is such a great man. He brought up all of us. He was there for us when we needed a father figure. He helped me to be the man that I am today. I'm very proud of myself too and even more proud of him."