Cabbies at war over high fares 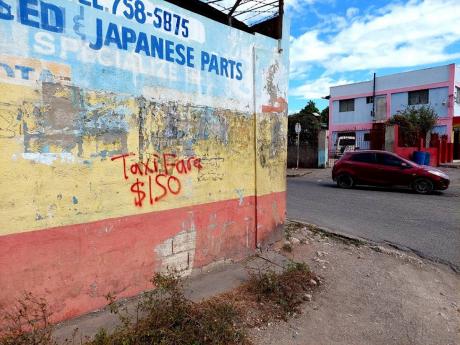 This sign along Waltham Park Road makes it clear about what passengers are expected to pay as their fare.

The Transport Authority is again urging commuters to report illegal activities following reports of an alleged fare dispute among taxi operators in a section of the Corporate Area.

"The official rate issued by the authority is $120. It is the 15 per cent fee increase that was given (in August 2021), there has been no other increase. Once they are charging above the stated rate, they are operating contrary. We have, from time to time, asked them [commuters] to just call in. We have a WhatsApp number [(876)551-8196] that we give them to call in and give us the licence of the vehicles they are having a problem with and we will investigate," said Merdina Callum, the communications manager at the authority.

THE STAR understands that along the Waltham Park to downtown Kingston route, several operators are currently at odds over the imposition of the fee being demanded from passengers. Reports are that some cab drivers are still sticking to the stipulated $120 rate. THE STAR also understands that those charging more are teaming up against those obeying the law.

One cab driver said that he has been branded a 'traitor' and is sometimes forced off the taxi stands downtown Kingston by some of his colleagues and 'loader' men.

"Last week, mi come pon di stand and two loader man tell mi say mi a violate the order and a shorten dem food, and then when mi look, dem and a taxi man wah tell mi fi drive off wid empty car," said the cabbie. He said that sometimes passengers will wait on his taxi for long periods, depending on the flow of traffic along the route, because of the cheaper rate.

"Some passengers tell mi wah day say di $150 man dem doah even wah carry dem and how much di loader man dem a diss dem up pon di stand a evening time when dem a try tek di vehicle. Two a dem [taxi operators] nearly fist it out wah day because one a use badness fi run the other off the stand cause him nah join dem clique and charge $150," the disgruntled cabbie said.

One passenger, who resides along Waltham Park Road, said that although the extra $30 dents her purse, she has no choice.

"Me cyah late fi my work because a fast-food restaurant me work and a cashier work mi do, so mi affi lock mi eye and pay di extra $30. Dem fi consider people still cause everybody have it hard," she said.