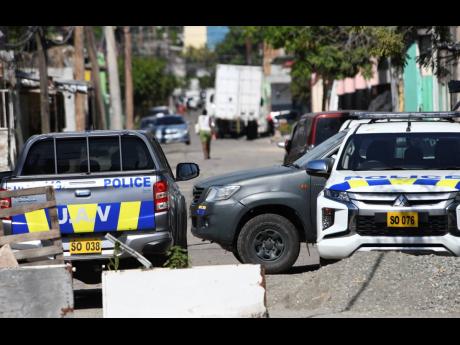 Members of the security forces in Parade Gardens, central Kingston, where a zone of special operations was declared last month. 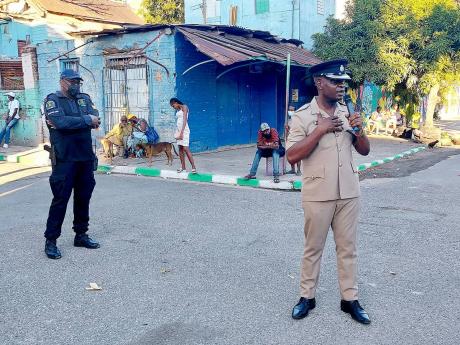 Commander of the Kingston Central Police Division, Superintendent Berrisford Williams, believes that peace talks and other interventions with thugs in the area do not translate to the police "bowing" to criminals.

"I will reiterate that our meeting with gangsters doesn't mean that we are bowing because it doesn't stop our investigation on current cases that we have from continuing and where it is in future we get evidence to charge any of them, those charges will be laid. So the main thing is to stop the bloodletting, create peace and tranquillity and remove the fear of crime and build confidence with the citizens so that the dialogue can continue," he said.

Williams told THE STAR that the lust for vengeance is fuelling the actions of the main perpetrators of violence in the area and he is hoping to calm the factions and bring lasting peace.

"They are pretty young, tend to have a very narrow vision with very little reasoning and that is why we have to be consistent with them in our interventions," Williams told THE STAR yesterday. "You get the feeling in dialogue with them that it is just some niggling issues, the fact that many of them would have lost loved ones in the past through violence and they are hell-bent on avenging them, and so the cycle continues. We know that if we don't stay on top of things, they will want to execute judgement themselves."

He added "We know though, it is not something that we have a one meeting or two meetings and problem solved. It is going to take months, if not years, and so from our side we need to be consistent and that is what we are going to do."

A clan-like divide which is stemming from a deadly feud between the rival Genasyde and Darkside gangs accounted for the deaths of 79 people within the division in 2021. The bitter fighting has left hundreds of residents cowering in fear, and prompted calls for a zone of special operations (ZOSO). In January, the Government acceded, declaring a ZOSO in Parade Gardens. Williams indicated that the ZOSO, and other interventions such as the police's community meetings, have so far been successful.

"Take for instance Spranglaz, where the players from Gang A Five and Russia [factions] were at odds. Before we had that meeting, things were so bad that we had to have a patrol posted around that area 24/7. The first meeting we had were with members that were players in what was happening around there. We have not heard of any incident since we started to engage with them on those levels," he said.

Williams said that the police are always looking for opportunities to have meetings with "all players" so that everyone is on the same page.

"But they seem to be having those dialogues themselves and so for now we are just watching and facilitating, having the individual meetings with the different varied members in group or as individuals and hope that will continue to cause the peace and tranquillity that we are having to hold," he said. "People are seeing things from our perspective and we are having a greater understanding of what is causing some of the tragedies so that we can be on top of it."