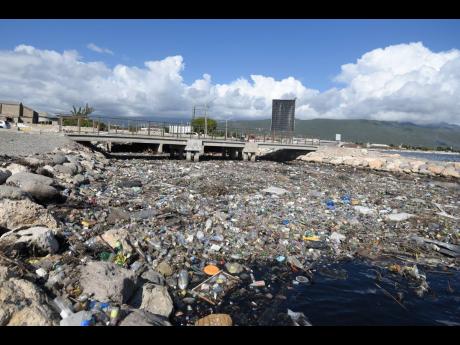 Smelly garbage that has piled up close to the boardwalk along Port Royal Street in downtown Kingston. 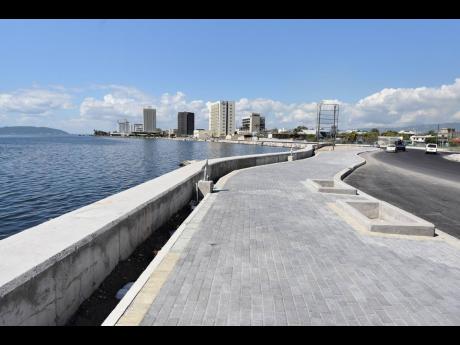 When the Port Royal Street Coastal Revetment Project in downtown Kingston is completed, persons will be able to stroll along the boardwalk and gaze at the Kingston Harbour
1
2

The unbearable stench at a section of the Kingston Harbour is threatening to become a major deterrent for persons to enjoy the scenery as they stroll along the an impressive boardwalk that is now under construction.

The boardwalk is part of the $950-million Port Royal Street Coastal Revetment Project that is expected to heighten the appeal of downtown Kingston. However, a miasma from piled-up garbage is ruining the boardwalk experience. Several persons believe that the stench is caused by a trap that has been set up in the harbour to gather plastic bottles and other debris that flow from the nearby Barns Gully.

A fisherman, who resides in the nearby Southside community, surmised that the situation is the result of a poorly constructed bridge.

"If yuh look good, you will see that under the bridge deh so yuh can see seh more garbage pile up than wah outta inna the sea weh dem set up the trap," he said. The fisherman said that he has not had the opportunity to use the harbour for extended periods as the stench can be unbearable.

But, according to Omar Sweeney, managing director of the Jamaica Social Investment Fund, which is implementing the project, the unpleasant smell is the result of several variables.

"My knowledge is that the stench along the harbour is a result of the flow that comes down mainly across the crescent of Kingston Harbour. Barns Gully is not any different, it was there before we got there. But you know, for example, the Kingston drainage situation, all the gullies outflow and people throw any number of things. When I say 'people' meaning it could be commercial industries that are putting their flow into it and it ends up in the harbour," he said.

Sweeney said that he is concerned about the negative impact that the situation is having on people and the potential threat that it poses to business development.

"If we are going to realise the real benefit of those investments, we have to deal with the environmental management of the area, and even be able to support the fishing livelihood that has been decimated by the environmental conditions. So, we are working conjunctionally, I would say, on some of those solutions. But right now, we don't know what it is yet," he said.

The project, which commenced last March, also involves the creation of a seawall, which stretches from Rae Town to the Ministry of Foreign Affairs and Foreign Trade building on Port Royal Street.