Police inspector who died suddenly was committed to job 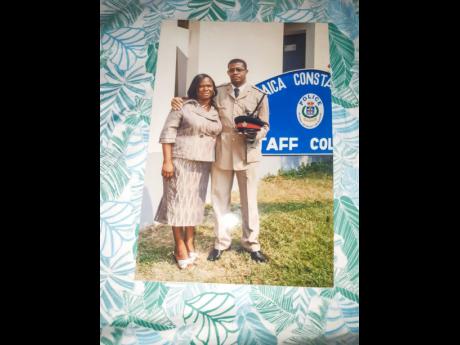 For 26 years, police inspector Rupert Harper gave his all in service to his country and died while performing one more act of duty.

Harper, 50, died suddenly while on duty in Lawrence Tavern, St Andrew, last Saturday, four days after celebrating his wife's birthday. The veteran lawman, who was serving at the Detention and Courts Division, was reportedly trying to mediate a dispute after he had arrested a person of interest when he collapsed. His widow Michelle, with whom he shared three children, said that she is still coming to terms with reality that her husband of 20 years has died.

"He was so dedicated that there were days where I was so mad with him because he would get up in the nights and sometimes again throughout the day to write reports. He was just into his job. He loved what he did and he was always saying that he had a crime plan that he believed would solve the problem in Jamaica," she said. "I have decided to take it one hour at a time and I have asked the Lord to guide me, guide our children and my emotions because I fear the thought of having a funeral right now. So I try to think about the happy moments we shared and not what I have to do going forward."

Michelle said that her pastor and friends had organised a birthday party for her that Saturday, and it was after she returned home from running errands that she got the dreaded news.

"I stood there in disbelief. I said I need to see him for myself, so I went to KPH [Kingston Public Hospital] and got a chance to speak to the doctor that pronounced him dead," she said. "When I reached there he was already sent to the morgue and we went to see him. He had a bruise over his eye, blood was in his mouth because he did fall." Michelle last spoke to her husband about 9 a.m. Saturday as he was leaving the house.

"I stood at the doorway when he was going through the gate and I looked in his eyes, and he looked into my eyes, and is like I was saying 'I love you' and he was like saying 'I love you too', but we didn't use any words," she said. Michelle described Harper as loving and said that as a father, he was a strict disciplinarian who always wanted the best for his children despite, at times, being "on the miserable side".

"He thought the children must be perfect and not make any mistakes. But he was very supportive and did all that he could financially. He was very helpful at home. He did the best he could to the best of his ability," she said.

Harper, according to his wife, loved farming and dub poetry and said that whenever he was not on duty, he gave motivational talks at various schools, or prayed for prisoners in various correctional facilities.

"He had a good heart. A man of integrity. A man who loved people, care for people and he was fearless. He was outspoken and it doesn't matter who you are, if something was not right, he would say it to you. He was my everything. I am happy that I met him and I am happy that, although I wished it didn't end like that, but he died when he was doing something that he believed in," she said.

"He acted on intuition and brought in someone the police has had as a person of interest in an ongoing matter. He was there assisting in the furtherance of said matter. He collapsed in the Lawrence Tavern police area. There were police there with him and they were the ones who assisted him to the hospital," he said.