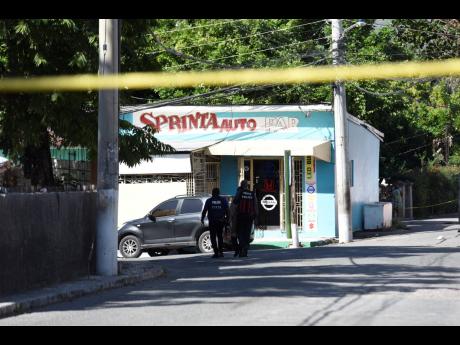 Police cordon off a section of Whitehall Avenue, St Andrew, where Craig Gooden was shot and killed yesterday.

An ongoing feud on Plum Lane in Whitehall Avenue in St Andrew claimed the life of a 39-year-old businessman yesterday morning.

According to police reports, at 7:35 a.m. Craig Gooden, aka 'Sprinta', operator of Splinta Auto Parts, was opening his shop when he was pounced upon by gunmen who fired several shots in his direction. He was taken to a nearby hospital where he was pronounced dead.

As detectives from the St Andrew North Police Division processed the crime scene, several tight-lipped residents looked on. One, however, told the news team that yesterday's murder could spark more fury in the community which is experiencing a surge in violence.

"A good little while him a operate him business and now dem come kill him. Him is a powerful man in the space so mi know it nah go stop yah so. People close to him do things too so mi know it nah go rest. Mi tired a di bag a war. Dis morning when di shot dem start beat, people panic and just a run and a hide suh," the resident said. Several persons have been murdered in recent weeks in sections of Whitehall Avenue.

Commanding officer for the St Andrew North Police Division Senior Superintendent Aaron Fletcher told THE WEEKEND STAR that the investigation into Gooden's murder is still in its preliminary stages but he acknowledged that there has been conflict in the space for weeks.

"It is believed to be resulting from some conflict between criminal operators within the space over a missing or stolen illegal firearm. This has resulted in a split within the groups in the community and we believe, although we cannot precisely say, that this latest killing is in relation to that, " he said.

"We know that the players there are deeply involved in scamming. It is the gains that they used from lottery scamming to finance these activities including the purchasing of illegal firearms," Fletcher added.