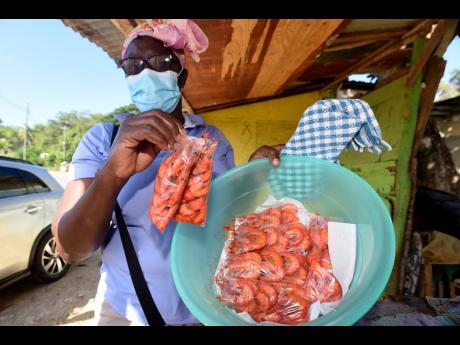 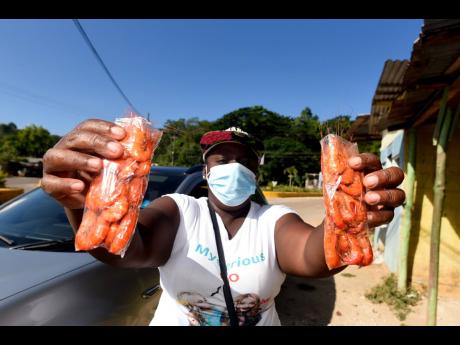 Omego Johnson, a shrimp vendor from the community of Middle Quarters, which is dubbed the shrimp capital of Jamaica. 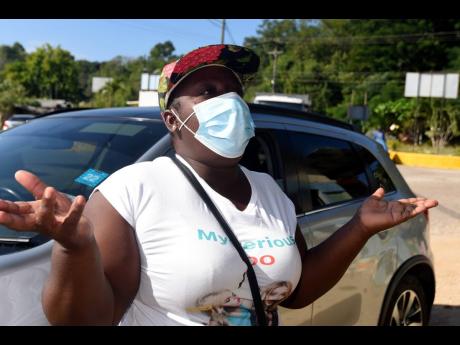 Omego Johnson said that vendors often have to contend with persons who order their shrimp and drive away without paying. 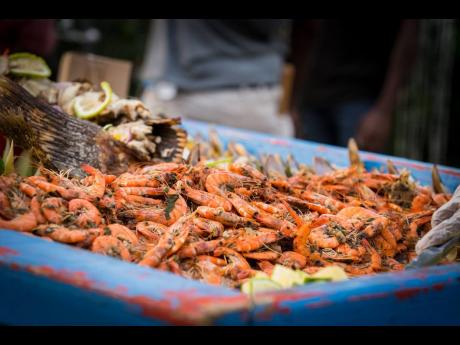 Middle Quarters is dubbed the shrimp capital of Jamaica.
1
2
3
4

"Are you sure we are at the right place?" I asked my co-workers rhetorically as we drove into Middle Quarters, St Elizabeth.

Just minutes earlier, I had rolled down the car window with the hopes of inhaling the spices from the shrimp vendors' pots. The only scent that hit my nostrils though was the cool and crispy St Elizabeth air. We passed a woman at a stall who held up about four clear plastic bags of shrimp. My co-worker, who was anticipating enjoying a bag of the peppery crustaceans, placed his $500 note back into his pocket. Another woman pointed towards a pot of corn on a coal stove, but there was no other shrimp in sight. Well, at least until we came across Sharon Ball and Omego Johnson, whose stall was nestled under an almond tree.

"Good morning, we have some nice, big 'swims' [shrimp] to sell unno," Ball said while Johnson showed off the products. As we exited the vehicle, Ball sanitised her hands and shoved three bags of shrimps into our hands. I enquired about pepper but Johnson laughed.

"We nuh dweet like how unno used to inna Kingston where dem pepper it after unno buy it. We cook it down with pepper and seasoning," she said between laughter.

I bit into one of the shrimp and my eyes watered instantly and both women chuckled even louder before handing me a napkin.

My mouth was on fire, but that is what I have come to expect whenever I stop at Middle Quarters, the shrimp capital of Jamaica.

But a lot has changed in shrimp country. There was once a time when the area was flooded with vendors, waving bags of shrimp in the line of sight of passing motorists. However, on Tuesday, only Ball, Johnson and another woman were in sight, and it was minutes after 10 a.m. There has been a massive decline in the shrimp population in the nearby river from which the crustaceans are normally harvested. Vendors are now mainly relying on those from the seafood stores. This has caused some vendors to seek an income elsewhere while others have lost interest in the trade.

"About five years now we have the river shrimp shortage due to global changes. One time mi used to survive by bare river shrimp but now mi have to buy from Rainforest [Seafood] and the one dem catch at the sea and those are more expensive, and we have to sell it back at the same price because the customers dem nah go understand. So it's less profit for us," said Ball, who has been in the business for more than three decades.

The 54-year-old mother of seven said her shrimp business was what funded her children's education.

"Three of them went to university and is the shrimp money do it because I could take loan and throw my partner from it," she said.

She said the number of vendors in the square has dwindled from approximately 40 to just eight. The massive decrease in the number of vendors, Ball reasoned, is directly linked to the fact that they now have to be buying shrimp from commercial players, rather than from locals who normally harvest from the river.

"Some people don't want to buy it because dem say it too dear [expensive] and dem nah make much money. Dem wait until dem can get even a small portion of river ones but we can't wait suh long because we have our kids to feed. It really rough but we a guh stay here same way. We nah give up on shrimp but mi worried say after we leave it, the younger generation nah guh take it on," Johnson said.

"The young people dem nuh like it. We come from generations of swims sellers because our grandmother and mother use to sell it and we take it over, but mi nuh really see it a continue after we," she added.

While the vendors enjoy serving up bags of peppered shrimp to motorists in Middle Quarters, there are some shortfalls.

"Sometimes the drivers pass and splash us up and another time we will all approach a vehicle and before the driver just say dem not interested in buying, dem all wind up dem window. There are times when the cars will stop and persons will order and then just drive off and right there suh we just have to call it a loss. But we nuh make dem things deh bother we to the point where we wah pack up and leave because we love selling shrimp. We plant right here with the almond tree," Johnson said.

Retired marine scientist Dr Karl Aiken, when contacted by THE WEEKEND STAR, said that overfishing could be a possible cause of the shrimp shortage.

"It is a small fishery that has been going on from the days of slavery and at the time when I did a study some 40 years ago, they were doing really well and was getting some four or five species of shrimp," Aiken said.

"At that time, the number of persons selling shrimp in the New Market and Santa Cruz area was small ... There is now a greater demand from the market for the shrimp from the same location, so overfishing may be the cause," he said.

Aiken also suggested that pollution, especially from dunder linked to the production of sugar, may have affected the shrimp population in the river.

Additionally, the St Elizabeth Sustainable Development Plan, produced in 2015, pointed to the introduction of "hard back" shrimp into the river. The new variety, said to have been as a result of a commercial shrimp-raising project, led to the decimation of the local soft-body shrimp which was once in abundance in the river.