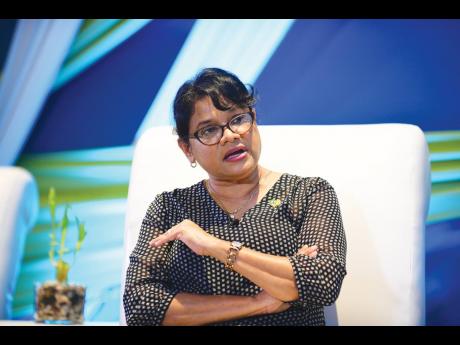 Jamaica's Chief Medical Officer, Dr Jacquiline Bisasor-McKenzie, believes the island will suffer during the fourth wave of COVID-19 especially because of the slow vaccine uptake rate.

"It really is very disappointing to see the slowing down of the vaccination process. At this time when we're into this fourth surge and we're going to be seeing a large number of persons that are going to be infected. The larger number of 20-39 age group that is affected then certainly they are going to be passing it on to the over 60 and it is crucial that these persons become vaccinated," the CMO said during yesterday's COVID Conversations press conference.

"We are going to suffer as a result of it. When we have so much vaccines available that we are even going to be wasting vaccines. And at the same time, we're wasting lives because people can protect themselves but they are not doing so."

Jamaica's COVID positivity rate stands at 46.8 per cent. On Wednesday, the country posted a record 1,128 new cases, pushing overall positive cases to 98,194. The reproductive rate of the virus is now 2.4, meaning that every infected person will infect nearly three other persons. There have been 4,863 active cases confirmed in the last two weeks. Bisasor-McKenzie noted that Jamaica is not yet ahead of case projections of 1,500 to 1,600 daily infections in the peak week, which is expected by month end.

The CMO shared that while there is data that suggests that the Omicron variant is milder, that data is from countries with far higher vaccination rates than Jamaica.

"And vaccination allows you that if you should become infected, you would have a milder illness. So, it's extremely disappointing to recognise that after all the work that we have put in, now that Jamaicans have an option, in terms of vaccination, that they are not taking up the vaccine and protecting themselves and therefore putting our health system and the country at risk again," she said.

Bisasor-McKenzie projected that amid this fourth wave, there will be an increase in hospitalisation and possible deaths within the next two weeks.

"What we will see is that bed occupancy and deaths don't normally go up at the same time. We would see a two-week period where we would then see if we're going to have an increase in deaths," she said. Health Minister Dr Christopher Tufton cautioned Jamaicans against promoting the idea that the Omicron variant is milder.

"The complacency is worrying; I am concerned about it. I really want to encourage us and influencers in the society to stop promoting the mildness of the virus in a manner that could discourage the protection that the country needs, and the uptake in the vaccination levels that are necessary," he said.

As of Wednesday, only 26 per cent of the population has been vaccinated. This translates to 1.2 million doses of vaccines administered.