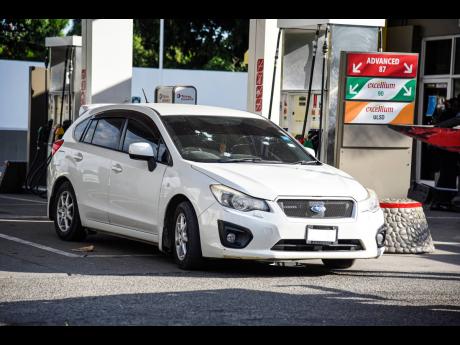 The car in which two men were killed at a Red Hills Road gas station last Monday.

Some residents and small business owners in Jackson Town, St Andrew, are now fearing the worst for their Christmas after a man was shot at a Red Hills Road gas station, more than a week after two men were killed at the same spot.

One resident said that the man, who works at a car wash and garage, is not a troublemaker.

"All him do a clean out and wash vehicle over deh. Him come from foreign couple years a back and from him come mi never see him and nobody inna nothing yet," said the terrified looking resident. Last week Monday, thugs fatally shot two men at the same gas station. John*, a resident, said no one knows why the man was shot.

"My fear now is that this might cause reprisals and that would mean the end of anyone's desire to enjoy the holidays. We need better solutions to the crime situation right now because it only seem to be getting worse," he said.

A shopkeeper said that just like last week's double murder, she was forced to close business early.

"So wah, people inna Jackson Town affi start live in fear now? Mi affi lock up early last week and then this again? It cyah continue like this," she said. Another resident, who regularly buys petrol and other items at the gas station, said she will be taking her business elsewhere.

"At this rate, and you cannot say it is overreacting given the climate in Jamaica, you just don't know what will happen here. I would be lying if I tell you that I would feel safe getting my petrol there after this," said the resident. Up to press time the police's Corporate Communications Unit could not state definitely the condition of the man. A representative could only say that investigators were still gathering information.