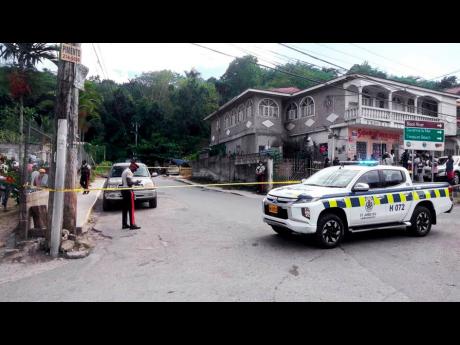 A brazen daylight murder carried out by armed men in Anchovy, St James, on Wednesday, turned into a heated gun battle and high-speed chase between the police and the gunmen.

The chase ended along the Bogue main road in Montego Bay, as the gunmen abandoned the vehicle and escaped on foot. The deceased has since been identified as Christopher Kerr, 28, otherwise called 'Stucka', of a Ducketts Road address in Cambridge, St James.

Reports by the Anchovy police are that about 12:45 p.m., Kerr was travelling in his Toyota pickup truck when on reaching the intersection at Anchovy Square, close to the Anchovy Police Station, a silver motor car pulled up beside him and two men armed with handguns alighted from the vehicle.

They opened fire hitting Kerr multiple times all over his body before speeding away. The police were quick on the scene and after getting a description of the getaway car, they gave chase and caught up with the gunmen along the Bogue main road.

A high-speed chase and heated gun battle ensued, but later ended when the gunmen ditched the vehicle in the Bogue area and escaped in the area on foot.

The lawmen also drove to the location where Kerr was shot and discovered him slumped around the steering wheel of his pickup truck. The scene was processed and he was later removed from the scene and pronounced dead at hospital.

Anchovy residents said the police need to step up their game.

One man told THE STAR "Mi born and grow inna Anchovy and a several murder tek place right yah suh, an all a dem tek place inna broad daylight. In a community full a police an not one a dem a patrol the area, and yu have man a kill man right beside the station, no sah, this caah right at all."