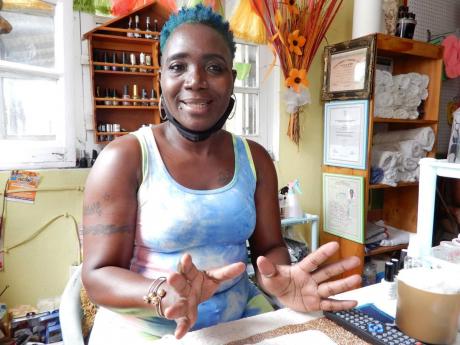 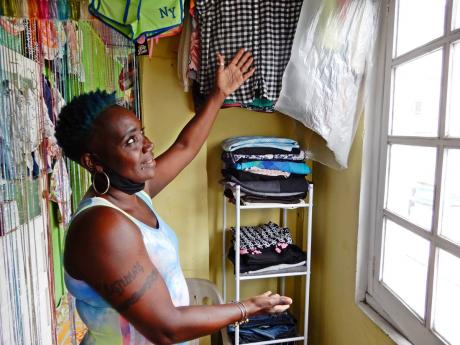 Lydia Telfer has been renting clothes to people who are not properly attired for their appearance in court.
1
2

Junior Johnson* journeyed several miles to reach the St Ann's Bay Parish Court last Tuesday, to answer to a charge of not wearing a mask in the public space. He sat on the bench waiting patiently for his name to be called. After waiting for more than an hour, the moment arrived for Johnson to get his day in court. He rose and approached the door to the courtroom, but was stopped in his track.

"Sorry, sir, you cannot enter the courtroom dressed like that," said an officer at the door, barring him from entering.

Johnson looked down at his ripped jeans and shook his head in frustration.

There are strict dress codes for parish courts across the island. Women are not permitted to enter if their chest, stomach area or thigh is exposed. Tight clothing such as blouse, pants or mini skirt are not allowed.

Men are not allowed to wear earrings, the shirts must be tucked inside pants, their chest or chest hair must not be exposed, and the pants should be secured to the waistline. Johnson's ripped jeans were deem inappropriate.

A woman, who was seated on a bench waiting for her name to be called, observed what was happening and beckoned to Johnson to come over, which he did.

In less than 10 minutes, Johnson was back in the hallway of the courthouse sporting a black dress pants and, with a look of satisfaction, went to the officer at the door.

She looked down at his pants and said to him, "Okay, you next."

Lydia Telfer's Lydia Kids and Nail Studio, located across from the courthouse, made the difference.

She said that one day she was at the courthouse and the idea of renting clothes to persons going to court popped into her head, which led to her starting the clothes rental initiative.

"I come up with this idea of my own because I see people come to court and they turning them back, so I say okay, why not get some stuff for people to wear to court since I'm close by the court? And I tried it and it worked. It was working very good at first, but now things are very slow, but I'm still going on, hoping that things will pick up back after the pandemic," Telfer said.

Telfer's court rentals caters to both men and women.

"If you come and you're not properly attired for court, you can come right to me and get your clothing. I rent dress pants, shirts for the men; dress pants, dresses, tops for the ladies; proper attire for the court."

The most popular item rented is men's pants, given the popularity of ripped jeans nowadays.

Telfer says she observes the COVID-19 protocols and also ensures that her clothes are properly taken care of.

"If they wear a pants today, I take it home, wash it, iron (and bring it back)," she explained.