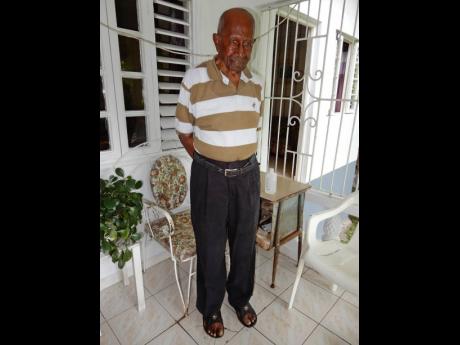 Alphonso Augustus Williams is grateful to have reached 100. 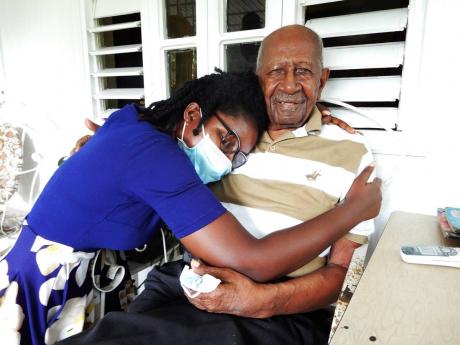 Alphonso Williams gets a hug from granddaughter Alejandra, who he says is his favourite.
1
2

There's more to centenarian Alphonso Augustus Williams of Steer Town, St Ann, than just the fact that he was the parish's first enlisted firefighter.

Williams, who retired at the rank of superintendent, was also councillor for the People's National Party, representing the Lime Hall division for 12 years and served as deputy mayor of St Ann's Bay. He offered food, clothing and shelter to several persons over the years, some of whom went on become university graduates. Williams celebrated his birthday on September 13.

"It was a lovely day," Williams told THE STAR. "Who were not able to be here, I spoke with some of them over the phone, from Tanzania (Africa), United States, they just rally around me and made me feel good." He partially credits his long life to his love for people.

"I'm the kind of man they would call me a philanthropist, I like to help," he said, adding that he inherited the 'kind genes' from his mother, Mabel Hamilton-Williams.

"She was one of the kindest persons I've ever experienced," he said. "I think I adopted some of her principles. A lot of children we try to help them go back to school and some parents would come out with their stress. I always try to help them." Williams is also St Ann's oldest justice of the peace, but he's not active because of his age. Williams' spouse, Veronica Townsend, died in 2017. But he still has nine children, 13 grandchildren and three great-grandchildren. His home, which he nicknamed Tranquillity, has sheltered many persons over the years. His granddaughter Alejandra Williams said that he is one of the kindest persons she knows.

"I grew up seeing my grandfather take in children, take in parents. So when I used to come here I would meet up on different persons here, literally," she said. "He would either give them somewhere to stay for a weekend, or a few weeks, sometimes it would last for a year."

Williams, who at one point was a bus conductor in Kingston, enlisted in the fire brigade in November 1951 when the St Ann's Bay Fire Station was being constructed.

"It was eight of us, two went before us to York Park on a training course then came back down. Then the six of us went. They trained us about three months. At that time there was not a fire unit, but a fire unit was on order but we had a pickup that the parochial board gave us at the time. At the time we didn't have very much fires. We generally have like bush fires and cane fires," he said. In 1961, he was promoted to sub-officer. At the time the Ocho Rios Fire Station was being built and upon completion, he was sent there. He was later transferred to Portland, where he served for four years, then to St Mary where he served until he retired in 1984 after 33 years of service. In the 1970s, he received a medal for long and meritorious service to the fire brigade.

"My happiest moment was when I became superintendent of the fire brigade, because that was one of my aspirations," he said. "One of the things I adopted when I was much younger was punctuality. I think I can almost testify that I've never been late for work. I think punctuality makes you become responsible."