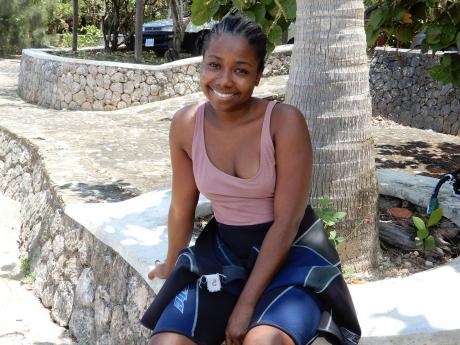 As a child, Jay James wanted to become a mermaid, but soon realised that it was not possible. 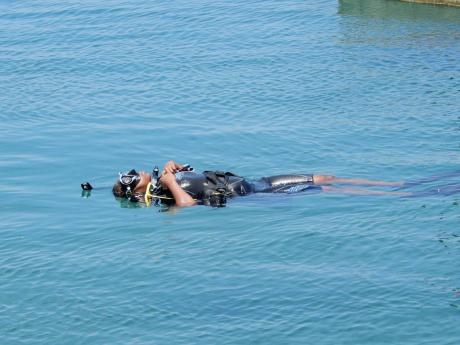 Jay James relaxing on the water at the Oracabessa Bay in St Mary. 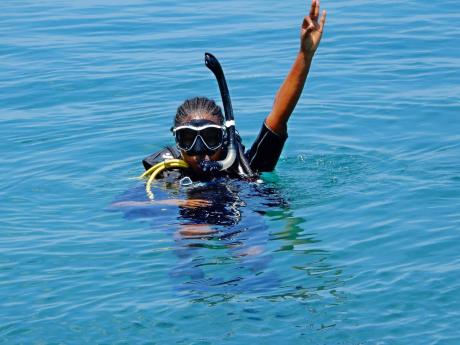 LEFT: Jay James gives the OK sign as she prepares to dive.
1
2
3

Little children are known to have fantasies as they grow, and this was no different for Kingstonian Jay James, whose fantasy was derived from an Australian television series, H2O: Just Add Water, which told the story of three mermaids.

James said she really wanted to be a mermaid but when she eventually discovered it wasn't possible to become one of those mythical creatures, she settled for what she says was the next best thing to it - a marine biologist.

"From high school I just decided that, 'Hey, Jay you're going to be a marine biologist so you can interact with the underwater world'," she told THE WEEKEND STAR as she got ready to upgrade her diving skills at the Oracabessa Bay Fish Sanctuary last Friday.

"You're underwater, you're interacting with the life under there, that's what mermaids do. And I do actually have a mermaid tail," she confessed.

Marine biology is basically the scientific study of the biology of marine life and organisms in the sea, including fish, coral, algae and other items.

Graduating from Wolmer's High School for Girls in 2013, James returned to complete sixth form before matriculating to The University of the West Indies, to do her degree to become a marine biologist.

It was by chance that THE WEEKEND STAR ran into her as she donned her diving suit in preparation to take to the water to upgrade her skills from an advanced open water scuba diver to a rescue diver, under the tutelage of diving instructor and sanctuary manager, Inilek Wilmot.

With her petite frame, she struggled a bit to don the diving gear, which included the scuba tank, but got some help from the instructor.

"Advance open water scuba diver is the second level on the PADI dive ladder, so at that level you are able to dive up to 140 feet. We consider that a deep dive, so I'm here now to upgrade that certification to a rescue diver. I'm here now to practise self-rescue, how to rescue other persons who are in harm whether underwater or at the surface. It aids my profession as a marine biologist but I also do it as a hobby," James explained.

PADI refers to the Professional Association of Diving Instructors, which is the world's leading scuba diver training organisation.

James is quite excited about her career and joins an area in which women are the dominant force, in Jamaica.

"You basically study the environment, underwater ecosystems whether animals or plants, and then the chemistry of the water itself. It's pretty exciting, you get to explore a whole different world, than on land basically," she said.

"It's a lot that comes with it. Basically, persons on land or persons who aren't used to the environment they just think it's fish and that's it. But when you get to go in depth and you get to explore, you find out there's a whole lot of worlds that you have to explore, and it's basically different species, elements coming together to make that world come alive."