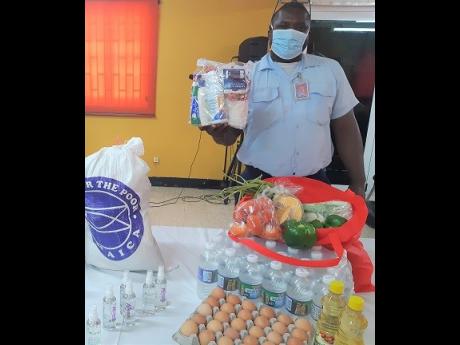 A total of 2,700 food and health care packages were distributed to healthcare workers under the Food For The Poor (FFP) ‘Basket of Care - Frontline Healthcare Workers’ initiative.

The care packages that were delivered between the period of August to October 2020, branded FFP crocus bags, included a mixture of multiple canned items, flour, rice, peas, milk products and other food items.

Each beneficiary also received in their individual package, a tray of eggs, one small case of small Wata, one large bottle of cooking oil and a Fresh Food box/bag that contained a mixture of fresh produce such as tomatoes, pineapple, cucumber, pumpkin, cabbage, and other produce.

The initiative was made possible through a donation by US couple, Marv and Ellie Walworth.

President of Food For The Poor, Ed Raine, thanked the donors for the continued support.

“The Walworths are a special couple and we want to express our gratitude for their consistency in helping the people of Jamaica especially the frontline workers who have remained devoted during this pandemic.” Raine said.

Overjoyed with the packages they received; the healthcare workers also expressed their gratitude.

Charmen Bryan Laing, an attendant at the Port Maria Hospital whose job includes sanitising areas after patients have completed their blood tests said, “While I’m really in a dangerous position, I have to provide for my two children. Financially, things have been very difficult for me as a single mother.”

She disclosed that one of her children has special needs and said, “For him to get a proper education, I’ve been sending him to a private school, because it is impossible for him to learn in a normal school environment. He also has to be taken in for a special doctor’s visit every six months.”

She continued, “I just want to say I appreciate every single item that I received.

“My wife lost her job due to the pandemic which has created issues for us financially. When I learnt of this donation, I couldn’t even sleep. I am thrilled for the package, and I am looking forward to preparing the eggs because my daughter loves them. I give God thanks for everything you (donors and FFP) have done for me,” Morlan Biggs an attendant at Spanish Town Hospital said.