UTech student salutes the man who changed her life 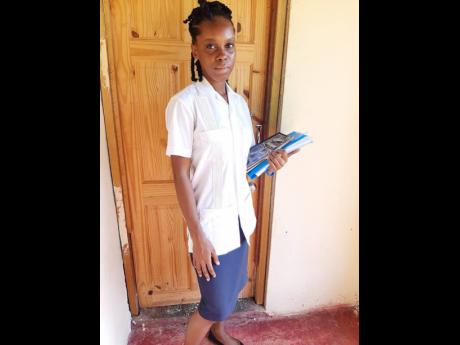 The past few days have been some of the hardest for university student Georgiana Weir. She says that the continuation of her studies at the University of Technology, Jamaica (UTech, Ja) is now in limbo after the death of her sponsor, Samuel Law.

Weir, 19, said Law, the owner of New Life Pharmacy in May Pen, Clarendon, who passed away last Saturday, has been a key figure in her life since she was in high school.

"He wasn't just a sponsor to me, he was more like a father figure. In fact, he played the role of both parents. I miss him greatly, and one of my biggest regrets is that he will not be able to see me graduate from university," she told THE WEEKEND STAR.

Weir is currently pursuing a bachelor degree in medical technology. The May Pen resident said her parents became ill several years ago and were unable to work.

She was awarded a scholarship by the James and Friends Education Programme while she was in grade four at Cross Primary and Junior High. Two years later Law decided to sponsor her for five years of high school, which she said "was like a miracle for me".

"When I was in fourth form, I was diagnosed with an ovarian cyst and had to do an operation, which set me back a bit, and saw me doing an additional year at school. But he never got frustrated. He stood right by me and even assisted me with numerous medications and other things," the Denbigh High past student said.

Now a second-year university student, Weir has heaped praises on Law, whom she said was her "life changer", even as she ponders how she will be able to complete her studies without him around. "I really don't know where the funds are going to come from now that he is gone. Everything is left hanging in the wind, " she said. "I really don't know what is going to happen but I am determined to make it through. I am not doing it just for myself but for the Mr Law, the good Samaritan who has changed my life tremendously. For now, all I can do is just hope that I will get some form of assistance, but I will not give up."