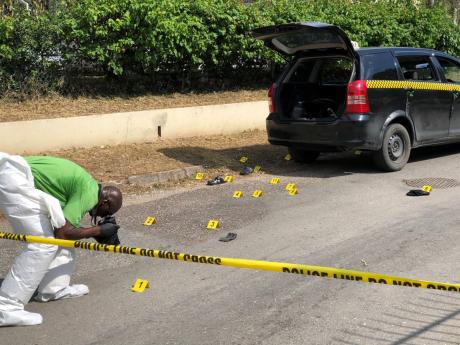 A taxi driver was killed yesterday, and three of his passengers injured, after gunmen attacked them on Phoenix Avenue, off Hope Road, yesterday.

It is reported that about 1 p.m., Rohan Hall, of August Town, was transporting three passengers when he made a stop to change a tyre. As soon as he exited the vehicle, a group of men approached him and opened fire.

Head of the Constabulary Communications Unit, Senior Superintendent Stephanie Lindsay, confirmed the incident, and told THE WEEKEND STAR that the passengers have been hospitalised. An investigator on the scene said more than 25 spent shells were found.

"Is a barrage a shot fire! That was definitely a target to me ... is like dem directly go fi the taxi man," the person said. "I don't even remember how much people me see. I just know that the man dem fast like bullet. And when me think the shot dem done and everything done, them turn it on again. Him couldn't escape. Me a tell yuh seh dem go fi kill him."

Other motorists were dismayed at another taxi driver killing. Just last week, a taxi operator was shot and killed along Liguanea Avenue in St Andrew.