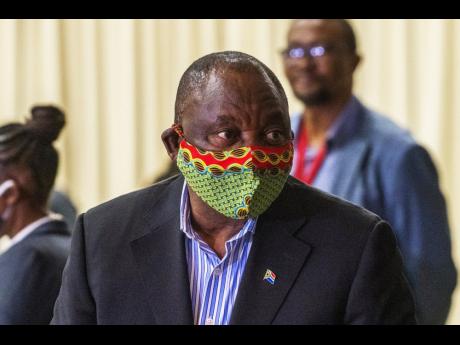 JOHANNESBURG (AP) — South African president Cyril Ramaphosa has announced he has gone into quarantine after coming into contact with a dinner guest who has tested positive for COVID-19.

Ramaphosa came into contact with a guest at a dinner of 35 people in Johannesburg last weekend, the president’s spokesman said Wednesday.

The dinner was to raise funds to support South Africa’s schools.

“The event adhered stringently to COVID-19 protocols and directives on screening, social distancing and the wearing of masks,” acting spokesman Tyrone Seale said.

“As was the case with all guests, the president himself removed his mask only when dining and addressing the guests.”

Ramaphosa is not showing any symptoms and is working at home, he said.

The guest who tested positive is getting medical care, he added.

Ramaphosa learned of his possible exposure Tuesday night, after he had unveiled a statue at Johannesburg’s O.R. Tambo International airport and later answered questions from parliament in an online briefing.

With nearly 718,000 cumulative confirmed cases, South Africa accounts for more than 40% of all the more than 1.7 million cases reported by Africa’s 54 countries, representing a population of 1.3 billion people.