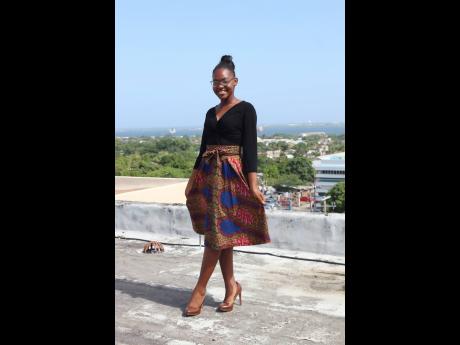 "I am Kevinna Melbourne and I am a 16-year-old student of the Morant Bay High School ... oh, and I am a ward of the State," is the introduction THE STAR was given when the Jamaica Cultural Development Commission (JCDC) Children's Gospel Song Competition winner of the solo 11-15 category came to our offices for her interview last week.

The eldest of four children, Melbourne was the only one who ended up in the care of the Child Protection and Family Services Agency following the death of her mother in 2010. Her siblings, two sisters and one brother, were fortunate to find security in the homes of their fathers.

"We were never looked at as normal children, firstly because our mom had four of us for four different men, and anytime our relatives introduced us, it was always as if were the unlucky children that were left behind," Melbourne shared.

She continued: "Six years of abuse was enough. Two of my siblings went on to live with their fathers during that time, but my sister (the second to last of us) and I could not take any more. That's when we went to the police station."

Her sister was eventually connected with her father, but Melbourne became a ward of the State in 2016. It was the same year she decided to explore her heritage, singing talent, and enter the JCDC competitions.

"I did end up meeting the man who they claimed was my father. I really don't know. That's what they said. But things never worked out the way it was expected to, and I was placed in the system."

Singing became an outlet for her, and she penned lyrics for original pieces that shared the stories of abuse and emotional pain.

"I just liked the whole experience and started getting more and more involved in JCDC from then, while in second form, until now," she said.

She was finally placed in the care of Maurene Wray, her foster mother, last year.

Melbourne said that children in state care are often mischaractersed and stigmatised.

"I want to change that thought because all I see when I go to the various conferences is something special in each child in the system. ... but most of us are strong humans and talented ones at that. I believe we must be admired and respected for that," she said.

She says a lot of outsiders tend to hear ward of the State and think it is the child that has done wrong instead of showing sympathy for what the child may have previously been exposed to.

"It takes a lot of maturity and thinking. It's not an easy road to travel," she said.

The children's officer from the Child Protection & Family Services Agency, Judine Webb-Brown, has been responsible for Melbourne since she became a ward of the State in 2016 .

"We have only high hopes for her, that she will make us proud as she has been, to go to on university and just focus on moving forward," the children's officer said.

Melbourne will be going into fifth form in September, where her studies are concentrated on the business subjects along with English literature as she anticipates sitting examinations to transition to a university to study towards achieving her goal of becoming a journalist and respected businesswoman.