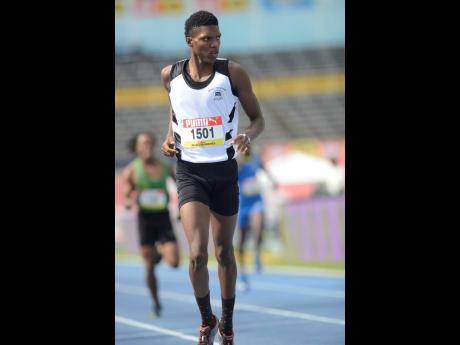 Jeremy Bembridge of Tarrant High wins heat three of the Class Two 400m on day two of the ISSA/GraceKennedy Boys and Girls’ Championships at the National Stadium yesterday.

Tarrant's High's quarter-miler Jeremy Bembridge is set to create history. He could become the first athlete from that school to win a medal at the ISSA/GraceKennedy Boys and Girls' Championships.

Tarrant, which is located on Molynes Road, are yet to have an athlete in the top three at Champs. Bembridge could change all that as the very tall Bembridge (6ft 3ins) is among the favourites to win both the Class Two 400m and 400m hurdles. He told STAR Sports that he confident that he will put his name, and the school's, in the history books.

"I feel good to be representing my school at a big event like this and knowing that I have the chance to win my school's first medal at the championships," said the 16-year-old Bembridge.

"My school, my coach and my family have been behind me and they have been pushing me. I just want them to be proud by winning a medal at Champs," he said.

Bembridge entered the championships with the third fastest time of 48.46 this season. Only Excelsior High's Malachi Johnson and Rahiem Scott of Rusea's High, who was disqualified in the the heats of 400m after a false-start yesterday, have run faster than Bembridge this season. Bembridge won his heat comfortably in 49.76 seconds. He is also ranked third in the 400m hurdles this season and added that he is highly motivated for the championships and determined to do well in both events.

"I am in good shape because I have trained very hard and I just want to win a medal for my school," he said.

Bembridge's coach Marlon Walker said his charge has been putting in the work and he is confident that he will do well in both events.

"In terms of winning a medal, he is ranked right up there and I am pretty certain that he will win a medal in both events," said Walker. Bembridge is among five athletes competing at the championships for Tarrant.