STAR of the Month: D’Angel still calls herself a model 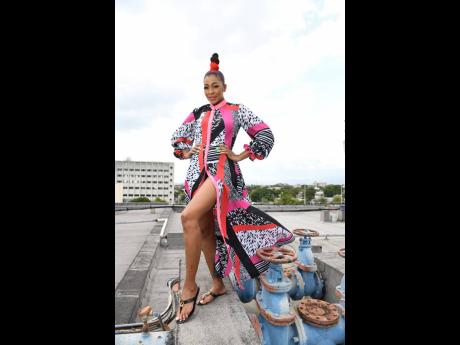 It turns out that Jamaica’s ‘First Lady of Dancehall’ hasn’t always followed the career path of being an entertainer.

In the past, D’Angel has put her high cheek bones, signature walking style, and long legs to work on the runways as a fashion model.

And she wasn’t just any run-of-the-mill model either – she landed photo shoots with international companies like the popular hip-hop clothing brand, Rocawear.

Her modelling career started in the 90s after being scouted by Miguel Model Agency on the way home from school.

Then she entered the Miss Jamaica Fashion Model Pageant where she excelled by winning sectional prizes.

“In the pageant, I made it to top five and won the prizes for best legs and congeniality. I was supposed to win, from yuh win best legs, yuh automatically think seh yuh a guh win,” D’Angel told The WEEKEND STAR.

The STAR of the Month has several modelling images in her album, and also reminisces on her short-lived competitive modelling experience which bloomed into a great career in the early 2000s.

She says she was no stranger to the big stages, cameras, lights and the action, and also participated in the Barbizon High Fashion Modeling Competition in the US in 2001, where she placed second and was the only black model out of 300 entrants.

“I never gave up, always trying to do something and being placed in the top was a huge accomplishment for me but after I did not win, I moved right along,” she said.

She returned home where she immediately capitalised on her entrepreneurial skills and put her associate degree in accounting and management to good use when she launched Angel’s Fashion Boutique.

Although D’Angel got caught up with her passion for music, she remained a constant runway blazer for local designers such as Neah Lis, Pebbles King, Uzuri and Keenea Linton, and does not refuse an opportunity to strut her 5’ 10” body on the catwalk.

“I am very competitive from them time deh until now; all that exposure in the modelling industry taught me discipline and how to interact with diverse personalities and people of different backgrounds,” she said. “It prepared me for the transition into the music industry where persons are constantly criticising the person as well as their work.”

She notes that modelling was not the only activity that helped shape who she is.

“Being a former member of the Young Women’s Christian Association in Spanish Town, who was active in the dance troupe, exposed me to the entertainment side of things,” she said.

With all the knowledge garnered through her experiences, the I’m Blessed singer still considers herself a model – a role model, for young females and people wanting to achieve their goals.