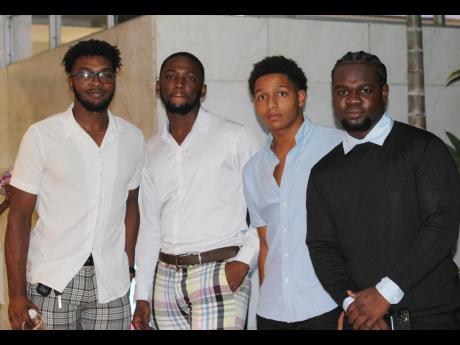 Under the glow of green and red lights of The Jamaica Pegasus hotel auditorium in New Kingston, organisers of Sting announced the show's grand return to Jamaica's music landscape.

While the usual dancehall dignitaries like Junior 'Heavy D' Fraser, Pamputtae and Sting founder Isaiah Laing were in attendance, a younger audience made entirely of people in their late teens and early 20s was also represented.

Christopher Pollard, 18, a dancehall loving Barbadian-Jamaican in particular turned heads as he told THE WEEKEND STAR he was so excited for Sting that he is hoping to change his flight home to Barbados just to attend the show.

"Personally, I'm leaving just after my exams so I was kinda just messaging my mother because I kinda wanna stay and come to Sting. So I don't know if I'll end up going but it would be a really fun experience and it'd be different to what I'm used in Barbados, 'cause Barbados has nothing like this. Nothing of this scale ... so this would be something completely different to me, an amazing experience for sure," he said.

The law student at The University of the West Indies said that although Sting has been absent from the Jamaican dancehall scene recently, its long reign impacted him from across the Caribbean Sea.

"I'm half Jamaican so due to the fact that I grew up [and was] born and raised in Barbados, I don't really have that cultural connection with one side of the family. So it's fun to come out and learn old dancehall, new dancehall, especially because my uncles and my aunts, this was their sort of stuff," he said.

Though he was only four years old at the time, Pollard said the 2008 clash between Vybz Kartel and Mavado was a profound moment in the process of him learning Jamaican music.

Pollard added, "I'm just now learning the music. The music that I would have listened to outside of Jamaica, thinking that's the predominant music y'all listen to, is not music they play in fetes."