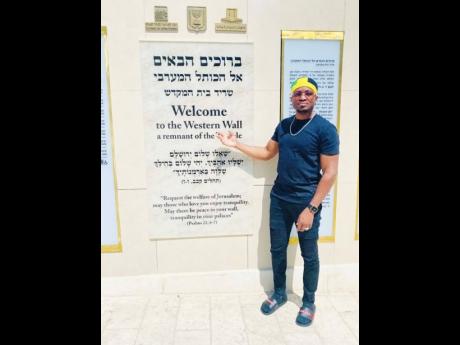 Patexx at the historic Western Wall in the Old City in Jersulaem.

Recording artiste and Grammy Award-winning writer Patexx is constantly working at keeping the Jamaican culture alive in international countries through his musical art.

In 2020, he began a tour in Israel which came to an abrupt halt due to the effect surrounding the recent pandemic. Just days before the US border closed, Patexx cancelled all remaining shows and headed back home. Upon returning to the US, he continued producing and building his company, Journey Music. Last month, he travelled back to Israel for a tour that took him to the cities of Tel Aviv, Rehovot, Haifa and Ber Sheva. Alongside DJ Blazer, he performed to sold-out venues.

Throughout his tour, he performed his singles including Party We Seh and Summer Time. During one of his live performances, Patexx could be heard practising his Hebrew by telling a fan on stage "You are beautiful." According to Patexx, who also goes by the nickname 'Journey Boss', "I really enjoyed Israel, I missed the road," adding that he is looking forward to doing more shows this year.

Patexx took the pandemic break to work on a few singes, including Right Yah Suh, which is an official release from his Journey Music record imprint. The video was released earlier this year on his official Vevo channel and features dancers from Atlanta including dancehall queen 'Queenie'.

While Patexx continues to build his repertoire as a successful artiste and songwriter, he is also determined to build his brand as a producer. He has worked on projects like Patrice's Make It Rain, Vybrid's We Connect and Barbie's Chemistry.