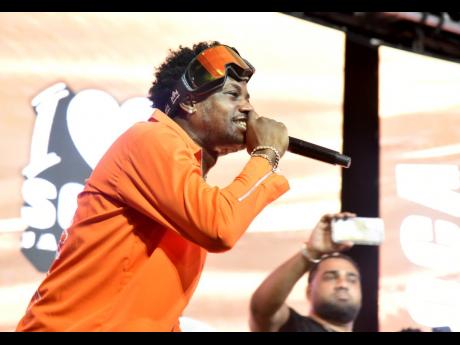 Ding Dong has called out entertainers for not taking responsibility for the way their music influences the youth.

"Shut the crap, bro. Of course it does, and the pickney dem a guh live wah dem learn and sing weh dem see. And I'm not telling them (entertainers) that you are responsible to raise a child, but if you sing about this and dem think it cool fi do certain things in a video, dem going feel it is cool for them to do it, too," he said. He was speaking to Jhaneille Esson, the 14-year-old captain of the St Jago High School's Challenge Quiz team, who was the host of a special Child Month's Interview Series with the artiste. Ding Dong advised young entertainers to be mindful of their lyrics.

"We have to be more conscious as to what we sing about as young artistes, because we have to understand, as bad as it be, we do have influence through the music. I am happy a whole heap a youth a get a break. It nuh so hard like one time, but I think in order to make dancehall badder, we have to kill we ego. If we come together as one, dancehall can be one of the most dominant genres of music in the world. Can't wait until late to do it," Ding Dong shared. He also disagreed with the belief that dancehall music has declined over the years.

The Good Ting Dem entertainer said that in the past, emerging dancehall acts had to find a camp, be part of a specific group, or know a popular person in the music industry to help introduce them to the platform. He noted that today young acts are putting their material on social media platforms in order to go viral.

"In terms of the quality of production, that is where something lacking, fall short. Not because you record something in a studio and it hit, it doesn't mean it get the proper production. That is what we lack with some of the music," he said. He also said dancehall critics must understand that music changes with time.

"With Bounty Killer and Beenie Man, prior to them, we had Stitchie and Yellowman and they were sounding different ... so what them could say, that Bounty Killer and Beenie Man mashing up music? No, and it's changing now because the younger generation coming up are listening and viewing different now, and who carry the music? The young people carrying music," he said.