Vyrus wants to infect the world with his music 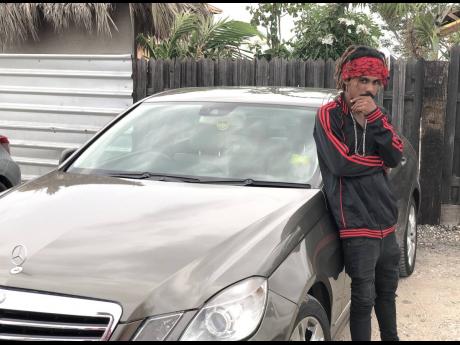 Up-and-coming dancehall deejay Vyrus, has, in several ways, created a controversial name for himself.

He got the 'prison stamp' 'Untreatable Vyrus' while he was incarcerated.

"The man dem used to hear me freestyle and say me bad. And one a dem did have one jeans weh di brand was Virus, so then we form the name 'untreatable virus' but with a small change of the spelling," he told THE WEEKEND STAR. "That a long before the pandemic. The name simple still. Everybody see say virus a something that once you ketch it, you a spread it. Nuff people a bun out di name but dem can gwaan."

The Clarendon-born artiste said that he plans to be more controversial than his name. With a catalogue charged with song titles like Evil, Traitor and 14 Gun Salute, he said that 'the bomb' has yet to be launched. He recently teamed up with LoneDon Entertainment to release the single Roll Like Dice which is part of a compilation on the Deep Sleep rhythm. Like the others, it is hardcore, but more on the sexual side, speaking of the desires to perform intercourse with more than one female at a time. His music video does not leave much for the imagination.

"Momentum is growing in the streets, and I think it's time to let the females hear what Vyrus has on store for them," the artiste said. "That song is a starter for what's coming next. Me song name Molly, weh me say ' pop pill get wild fi don... still high like drone', me know people a guh bun it out."

Recently, the Jamaica Constabulary Force raised an alarm about the increasing use of the party drug and its emergence outside of the school community where students were attending 'pill parties' and consuming it in food and drinks. Vyrus said that he was not concerned about the negative message he may be spreading to the Jamaican society and impressionable youths, with dancehall already labelled as the cause of many ills.

"Remember my slang is 'stubborn, enuh, nah nuh ears'. As a rebellious artiste it is not for me to decide what them listen to. And that molly topic is already popular with or without my song," he said. "Sometimes when you have good material, you nah get the recognition because of the lack of funds to put towards promotion. But entertain the people with things like that and it will easier reach the streets and the world, which me waan infect with my music." He said that he has three goals right now which are to "get rich, have my children in a good position financially and make my music reach a place where it a set trend inna dancehall globally".