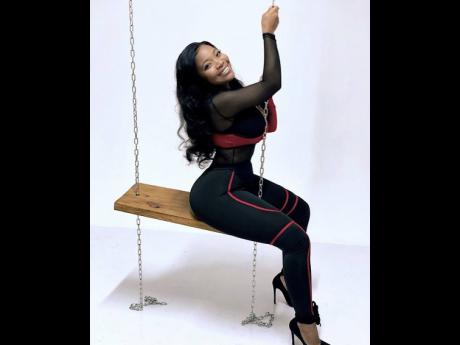 Dancehall newcomer Shellchapo believes that she has what it takes to compete against the leading names in the space, and she's not even speaking about the females; she aligns herself as one of the 'choppas'.

"I feel I can be a contender for the top spot," she said. "The only difference is, I'm not doing it for fun. I want to take my career in music as far as it can go."

Shellchapo has a unique style of recording which she likens to rap. "I prefer to rap. I consider myself more of a talker than a singer," she told THE STAR. However, she explores her vocal range on her latest single, No Sleep, which features Hydal.

"The producer definitely pulled it out of me to sing, because I really never considered myself a singer. I guess it could be defined as an evolution," Shellchapo shared. "I like to listen to the hardcore dancehall music, and also mixture of the happy, softer tunes. This is how I'm also able to test the space. The song does showcase both my raunchy and soft sides."

But don't let the smile and unassuming expressions fool you. Shellchapo's feisty lyrics and sexy punchlines are definitely penetrating the dancehall space locally and internationally, because she is aggressive. Since the release of No Sleep's video two weeks ago, the song has since been featured on New York City's popular radio station Hot97. Produced by Hitgruves Music, the single samples the 2001 hit Suzie by Tanto Metro and Devonte.

The past two years have been a period of 'no sleep' for Shellchapo, as she has been balancing her duties as a professional in the medical field while pursuing a career as a recording artiste.

"It's from work to studio," she said. "I don't go out. Most of my time is dedicated to my careers and I don't find it hard, as both are on different schedules."

She said her 2020 single, No Love, which was produced by One Time Music, was the closest to a breakthrough, but she is now seeing the results of her numerous tests with the new single.

"I have received more traction across digital streaming platforms, radio and on YouTube. I just want persons to give me a chance because I am working, and getting better at it," Shellchapo said.